Wild food finds, an apology and my dad

Well blimey - I hadn't realised it had been over a month since my last post but it was all the way back on the 1st May!  I've missed several blog challenges and cooked others but never posted them and generally probably come across as a bit slack.
I seem to have found it hard over May to shake the malaise that accompanies a bout of 'teetering on the brink of' depression.  [I also found it very hard to write that 'D' word then too.]
However, I am here now, albeit with a fairly brief post.  (I realised I was missing posting stuff as I can get so het up in these massively long and wordy missives laden with fairly dull photographs that they take so long to write they never get completed.)
So - that's the 'apology/explanation' bit done - now I have a question or two for us. 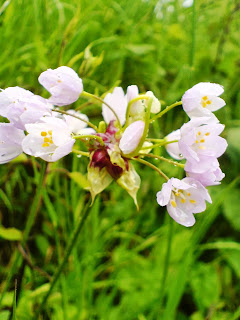 This is Rosy Garlic.  The Chap and I first came across this on Scilly last year but I recently was massively excited to spot a patch just minutes from the house!  Win!  I had been under the misapprehension that it didn't grow here on 'the mainland' as it likes it warm.
I am coming up fairly short on recipes for same on t'internet though so wondered if anyone else had any ideas?  The Plants For A Future page seems to have the most handy information I've seen so far - just from a very small amount of googling this morning.  Interestingly it also includes cultivation info - may just be worth a try.  I might recommend it to my Ma as well as several other sites suggested that it works to deter deer from your garden.  She suffers from the deer that live in the woods opposite coming and eating all her pansy flowers in the front window boxes each year - they very neatly just take the flowers which understandably does vex her rather! 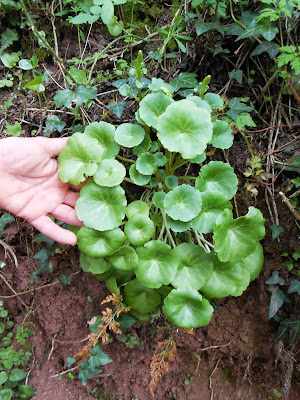 This image I'm not so sure of - it looks a lot like Navelwort to me but the leaves seem very large.  That's the chaps hand there too - not mine.  (Although there's not that much difference in size between our hands tbh...)  Navelwort can be eaten raw or cooked and I'd imagine would add a lovely crunch to salads but as ever with foraging - you must must be 500% sure what a wild plant is before you think of eating it.  So - a bit more research needed on this one I guess.  In fact I am leaning more and more towards it not being Navelwort - the leaves of Navelwort are apparently generally the size of a human navel so these are deffo way too big.  Hmm - wonder what it is then? 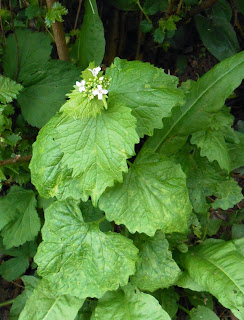 Lastly I gathered some 'Jack by the Hedge' (garlic mustard) a couple of day back and made a vaguely Greek style pie with it in.  I shall endeavour to post that later or in the next day or so but - I will not treat it as a 'fail' if I don't.

Today (here in the UK) it's Father's Day.  Dad was 'got' by cancer in 2005 and I think of him every single day.  Often that is what gets me moving when that malaise tries to descend; the sense of not wanting to let him down and still to show I can do my best.  Anyway, I thought I'd share this picture of my parents getting married back in 1969.  It's not the best pic but it sits on my mantelshelf alongside one of my mother at 21 and I love it.  Look at Ma's hemline!!! 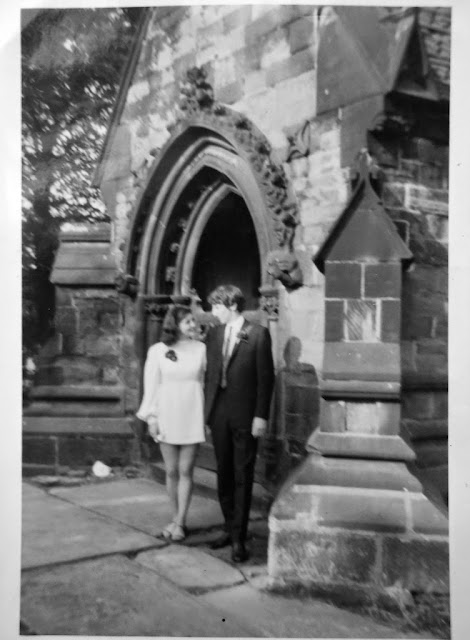 We never know how long we may be here for so love your important people and hold them tight as they could get snatched away without warning nor quarter given.  x
Posted by Ruthdigs at 11:06