Having taken some fish snaffled up from the bargainous CFC out of the freezer yesterday  with the intention
of making my crunchy topped fish pie, I realised tonight as I got home late from work that I really just could not be bothered.  So - what to do with the fish?  A nice chowder would suit the freezing outdoor temperatures nicely I figured, and should be easy to knock up.
Atypically for me I didn't then embark on a 2 hour research project comparing the relative merits of each and every recipe on the interwebs but I adapted this one from the BBC good food website and made it even easier and chunkier.

Soften the celery and leeks in the EVOO for 5ish mins while chopping the spuds.
Add the spuds, stock and lemon zest.  Bring to the boil then reduce to a simmer. 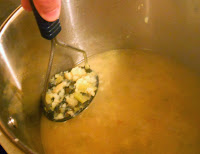 Stir the cornflour into a small amount of cold water and add to the pot.
Once the potatoes are soft (up to 15 mins) use a masher and crush them into the soup a bit.  How much is up to you.  It saves getting the FP out though!
Add the milk and sweetcorn and warm up.
Add the fish and cook gently for a few minutes until done.  Don't boil or the fish will fall apart.
Serve - I put a little more lemon zest on mine.  The original recipe suggests chives but I didn't have any. 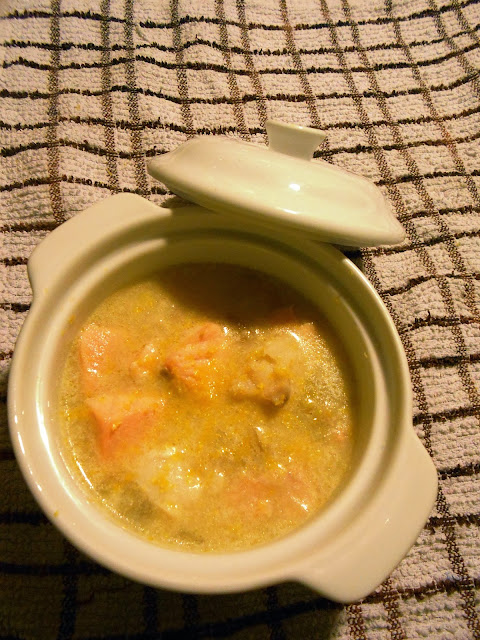 Tasty, easy and filling, I enjoyed this greatly.  Helped warm me through too.  :-)
As I'd used reduced fish it was a cheap dish for me to make and I just used veg that was to hand, so no need to shop especially for this dish.
Posted by Ruthdigs at 23:02