I'm afraid this summer has been a bit frantic at work and has led to some serious slackness on my part in the realm of blog posts.  I'm painfully aware that I have yet to write about our jaunt to the Scilly Isles and that was back at the end of May / start of June!!!  Eek!!!  Being a Virgo and thus a little bit OCD in certain respects I also have an irrational dislike of the very idea of posting stuff out of sync which means when I get behind with my posts everything gets backlogged - stuck behind some as yet unwritten so therefore only existing entirely 'in potentia' post.  I am trying to hoof pick (like shoe horn but fittingly it sounds more painful as is this process) myself out of this habit so as to allow some of my sputterings and scribblings out onto the world.  An uncaring world most probably but hey - I just write the stuff (occasionally) - once it's out there it's really not my problem any more.  ;-D
So - a short post this will be but it's purpose is to break the long gap and give you a little smile (hopefully) at the following spotted on the menu of an Italian restaurant in Teignmouth; on the coast about 15 miles down the road from us and one of my favourites of the little coastal towns in this neck of the woods.  I like the 'to the point'edness of the Pizza Mafia.  :-) 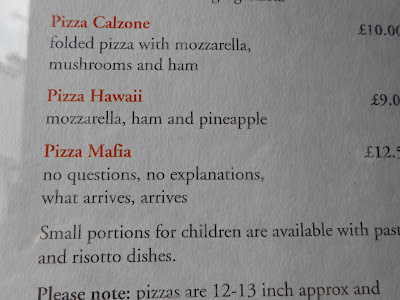 The restaurant itself is The Colosseum and is now firmly on our 'to visit' list as they looked very nice with a good sounding menu.  There were several seafood pasta dishes on the menu including a 'lasagne di mare' I'd like to try so I'll let you know how it is if we go there.
Posted by Ruthdigs at 17:22