No - it's not vodka to be sipped with your pudding course like a dessert wine.  Although that is perhaps an avenue worth exploring.  This is vodka infused with the scents and flavours of chrimble pud.  Taking just 3 days to steep I started this on Thursday evening for some last minute presents.  (I did mean to make this about a week ago but the Chap kept using the vodka for cocktails so I had to send him out for some more!)I'm afraid my tardiness in writing this up means it's a little too late for you to make it for chrimble but it could be a New Years Eve winner.
It's a frugal recipe as you can use the cheapest vodka - Aldi do a 70cl bottle for about 8 and a half quid.  S'burys basics version is £9.85 so you can happily get a bottle for under a tenner.  Some dried fruit, spices and an orange and a lemon complete the ingredients.
The recipe comes courtesy of the lovely Dan over at Frugal Living UK blog and can be found here - made rather earlier than mine as he's rather better organised than me!
I chose to up the amount so ramped up the rest of the ingredients correspondingly.  His recipe is for a single 70cl bottle so head over there for the quantities if you wish - mine are for a bottle and a half (1050ml) of vodka. 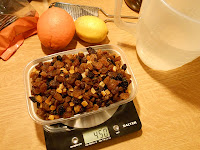 Vodka - a bottle and a half (1050ml)
450g dried mixed fruit
112g sugar
3 cinnamon sticks
9 cloves
1.5tsp grated nutmeg
What should have been: 3tsp ground mixed spice but, as I was rather lower on the mixed spice than I thought it actually was: 1.5tsp mixed spice, 1tsp chinese 5 spice and 0.5tsp ground all spice berries
Zest of 1 orange and 1 lemon

Put the lot in a big container and stir well.  Cover.  The original instructions said to keep it in the fridge but I've got mine out on the counter - it's alcohol so it won't spoil.
Stir at least once a day - I'm doing mine most times I go past to get all the lovely flavours into the drink. 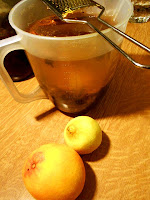 Steep for a minimum of 3 days - if I had longer I'd leave it longer but tempus fugit and we are hurtling headlong towards the day of festivities.
Strain though a coffee filter paper.  Dan mentions you can use muslin but I think a filter paper will give a better result - though it may take a while!!
Decant into some sterilised and prettified bottles and label.

Now Dan mentions that the vodka has a less than promising look; being the sort of brown colour that one would normally avoid putting in your mouth.  To this end I have come up with a little rhyme which I shall write on the labels for the vodka:

Be not afeared
Of a taste that's weird
The colour it be
Is just mimicry
﻿
Posted by Ruthdigs at 09:33