The rather fantastic blog Cooking Around The World by Chris has food from every continent on an almost daily basis it seems. Chris writes in an endearingly idiosyncratic style all of his own that I love. To make things even better he has a newish monthly challenge ‘Bloggers around the World’. Each month he picks a different country (or group of, this time round) and one should cook a recipe from that country. This month was the Caribbean. As the title may have hinted I’m somewhat tardy in getting this post up, I should have had it written and published by the 13th! Anyway, having made my recipe I figured I’d share it anyway. Maybe I can sneak it in the comments section of this month’s round up…
I had problems finding a recipe for the Caribbean. The Caribbean covers a lot of countries; mainly islands, all of which have a very different climate to our own and therefore a very different selection of ingredients readily available. Each time I looked for a recipe it seemed it had breadfruit (??), or there would be meat sneaked in. Looking for fish recipes I realised a lot of them used salt fish – not readily available in my corner of the West Country. So – I eventually settled on this veg soup recipe. Ok not as exciting as some of the recipes on this rather good resource site but at least do-able. It said it serves 8. I must say on reading the ingredients list we scoffed at this. However this is how it went – their ingredients in black, my differences in purpley-blue: 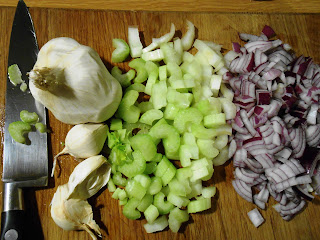 3 tbsp olive oil
1 onion chopped – 3 small red onions
2 sticks celery – 3 plus the inner small sticks to use it up
4 cloves garlic – ours were huge so I used 3
2 tbsp root ginger minced – grated mine on the zester
1 tbsp demerara sugar – had none so used 2/3 white and 1/3 dark brown
2 tsp sea salt – 1 tsp only [sea salt is stronger than normal salt]
0.25 tsp ground turmeric}
0.25 tsp ground allspice } I added some later on as you’ll see to make a heaped 0.5 tsp of each in total
0.25 tsp ground nutmeg }
2 potatoes peeled and diced – we only had small ones so I used 4 then added another 2 when I realised I was short on courgette = 6 in total 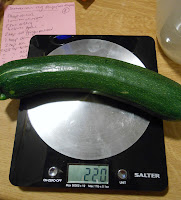 Heat the oil in a large pot and add the onion, celery, garlic ginger and sugar. Fry gently for 5 mins until softened.
Add the salt – having added 1 tsp I decided against the second one as it seemed too much, especially as I was using stock cubes for the veg stock which have salt in already. Add the turmeric, allspice and nutmeg then the spuds and courgette. At this point I added only 0.25 tsp of each spice as per the recipe.
Add the stock and bring to a boil then reduce the heat and simmer for 10 mins until the spuds are soft.
Turn off / remove from the heat and stir in the cayenne and spinach – at this point I added the 30g spinach quoted.
Blend. At this point it’s an entertainingly vibrant green colour and tastes of…not anything that zingy to be honest. It was a nice veg soup, but that was it. So…
Having only blended half of the soup I then added the extra spice to the unblended portion still in the pot and brought it back to a boil then simmered for a couple of mins extra to cook off the spices. Turn off the heat then added the extra spinach. Blended that portion then mixed the 2 batches together. 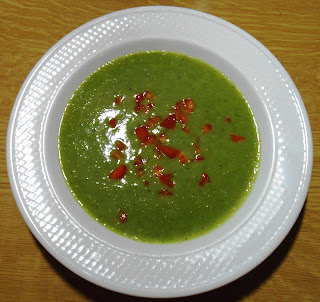 Verdict now – much tastier. Still not sure it’s shouting ‘Jamaican’ at me but then I’ve not exactly had a lot (any?) Jamaican food in my life to compare it to. It was nice and a good thick warmer for the colder weather we’re apparently headed for. I’m not so sure I’d bother again though.
The Chap liked the contrast provided by the minced red pepper, I was less of a fan finding the bits too cold and watery against the thick warm soup.  Oh, and that 'serves 8' thing - well it did make a mahoosive pot full.  :-)
Soooo – that’s my Caribbean recipe. Chris’s next country for us to visit is Mexico – now I just need to find a recipe, cook it and post it all on time….