First forage of the year

As the sun made a rare appearance today the Chap and I went for little bimble along the river before heading for a lovely roast for National Potato Day.  (Really.) 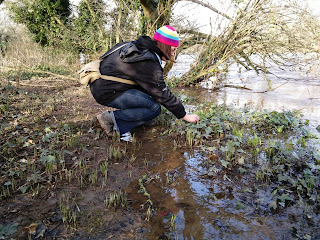 I wanted to take a certain route to see if there was any sign of the wild garlic yet and we were super pleased to spot some sprouting through the mud in our favourite spot.  Due to all the rain and melted snow the river's rather higher than is the norm so the most advanced plants were on the sunny bank that was also most nearly flooded - here's yours truly harvesting, pretty much 'in' the river!  Nearer the camera and behind me you can see the thin sprouts where the plants in a little more shade are still just pushing through the earth. 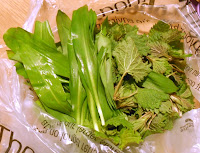 As we didn't get too much garlic (it's still early in the year after all) I also picked a handful of nettle tops and I'll pop them all in a soup/stew with some beans, veg and whatever comes to hand later.
Very pleasing to know that even in January we can get some free tasty food with the minimum of effort walking and rummaging in the undergrowth.  It was a thoroughly pleasurable amble in the sun so I wouldn't really count it as effort myself.  Also nice to see that it looks like a healthy year for the wild garlic as we want to make masses more pesto from it this year.  Top stuff - we ran out far too fast last year! 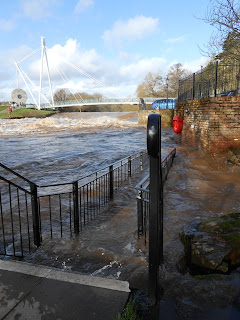 We finished the afternoon by going for the aforementioned roast at The Mill on The Exe, a riverside pub near us where they have the distinct advantage of doing a veggie option on the carvery.  Being right on the river they do have somewhat tenuous boundaries to their garden area! 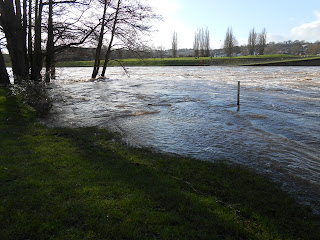