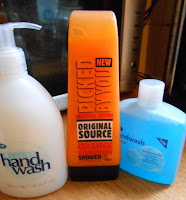 Points make prizes - apparently!  As we needed some more handwash for both the kitchen and the bathroom I thought I might have some points on my Boots card so popped in and bingo - £2.58 worth.  Making these 3 products cost exactly zero pence to us.  The 2 soaps were only 59p each anyway and the Source shower gel is currently on half price offer; including the special editions like this rather lovely smelling orange and cinnamon version, they were £1.15.  I love the Source range but don't like to get them at full price.  If you shop semi regularly in Boots though I think it's worth using the points card.  I know opinions are divided on 'loyalty' cards as the chains use them to gather shopping habit data about us but I deem myself intelligent enough to ignore any offers they send and just buy what I intend to.  If occasionally I can get those things for free I think that's a card worth having. 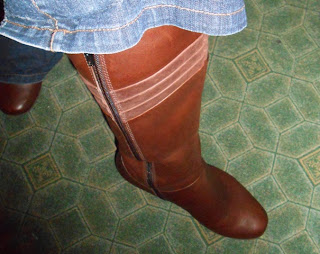 These are my other fantastic bargain of the week.  Now I have stupid size/shape feet (imo) - a half size difference between them and wide across but shallow through.  This means I can't wear most 'girly' shoes especially if they have a pointy toe as they're just not wide enough for my feet unless I'm prepared to spend a fortune.  However - it did mean I could scoop us these boots in TK Maxx the other day as evidently no-one else fitted in them.  They're Clarks Active Air range and the original rrp

was £99.99!  When TK Maxx first got them they wanted £49.99 - still more than I'm prepared to pay.  Since that they had a red sticker reduction, then a yellow one -neither of which I could see the price on, and finally the last yellow one with the price I paid on it - the princely sum of £17.00!!  What a saving.! They fit me as they're a wider fitting than normal.  They're really comfy (I assume that's the active air thing) and as the promised freezing weather finally turned up they're good for keeping my legs warm.  :-)  They're actually a darker brown than the flash has made them look here, more of a chocolate colour.  I'm seriously considering going back next weekend and seeing if they still have another pair left I can invest in
So that's my happy shopping for the week.  Right now I'm going to snuggle with the Chap in front of a film as it's decidedly nippy, and I have a couple of fat cakes solidifying in the fridge for the birds.  They struggle in this weather so don't forget them.  Although (so far) we haven't had the snow here I know most of the country seems to have seen some so give them a helping hand and as national treasure Sir David Attenborough apparently tweeted '@davidattenboro: The severe snow is bad news for the uk bird population. I got my fat balls out in the garden at the moment, I suggest you all do the same!'  Having had a quick look at his page I'm not entirely convinced that's the real David Attenborough but it's worth a giggle I think.  Stay warm peoples.
Posted by Ruthdigs at 16:15