We had a weekend in Dorset a few weekends back.  We went to see the Brownsea Open Air Theatre's production of A Midsummer Night's Dream.  We also got to meet up with my mother and sisters, brother in law, aunt and uncle, 2 cousins and their other halves.  So there was a fair few of us!
After a late Friday night on Brownsea Island enjoying the open air Shakespeare and our 'posh' picnic (de riguer for these things) - although enjoying the mossies somewhat less, we started later than usual for our Saturday morning walk.  We drove west through Corfe Castle and on up along the ridge until we turned off for Worth Matravers.  This is a very pretty little village situated a mile or so from the coastal path and homing my favourite pub, the Square and Compass.  (Of which I have spoken before.)
On the walk we saw lots of insect life on the hills and cliff tops.  This is a Marbled White butterfly - I think a male. 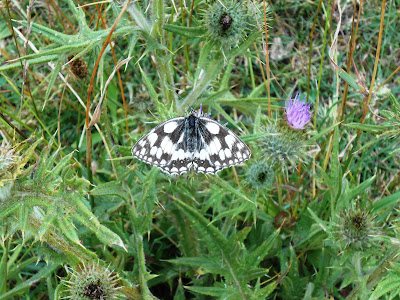 There were lots of these flitting about the thistles growing through the long grasses.  Often in the past I've seen blue butterflies on these cliff tops but not today - perhaps a sad indicator of the changing nature in our countryside?
This is a moth rather than a butterfly but was showing itself off just as enthusiastically, and was just as welcome a sight.  This is the Six Spot Burnet - rather fab don't you think? 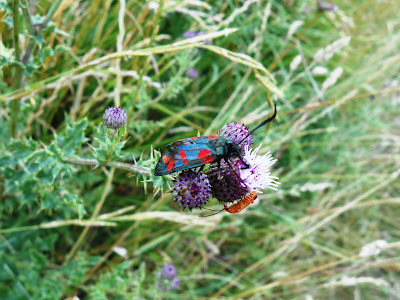 Later that day it absolutely threw it down, but thankfully after we'd had the customary pint and pasty at the pub.  :-)  It just wouldn't be the Worth Matravers experience without those!
If you should find yourself in that region of Dorset do give it a look, it's a beautiful place.

(PS - apologies for the shortness and fairly insipid nature of this post - I still seem to be struggling to have time to write these things up.  We've had the Chap's son staying for the summer and he has somewhat monopolized the pc as his laptop gave up the first week he was down.  He has now returned home so hopefully autumn should prove bounteous in posts as well as produce though!)
Posted by Ruthdigs at 14:18