A short treatise on the scotch egg

Now this may seem an odd subject for a pescatarian to pontificate upon but one of my favourite blogs to read has an author who is ADDICTED to the humble scotch egg, so keeps mentioning them, which keeps putting them to the forefront of my mind, and has thus made me overly curious about them.
(Yes John from Going Gently - I am looking at you here.)
Admittedly it doesn't take me a lot to become curious about something when it means I can spend several happy hours pinging around t'internet looking at recipes when the alternative is doing the washing up or some other dull as ditch-water pastime; but in my defence, before I gave up the meat eating I was partial to an occasional scotch egg.  So the realisation that there are many varied recipes for veggie versions out there got
me even more interested.  Then this weekend we found these intriguing sounding variants in Falmouth and the compulsion was complete - I will make veggie / fish based scotch eggs!  Once I've spent hours researching them of course!!  :-D 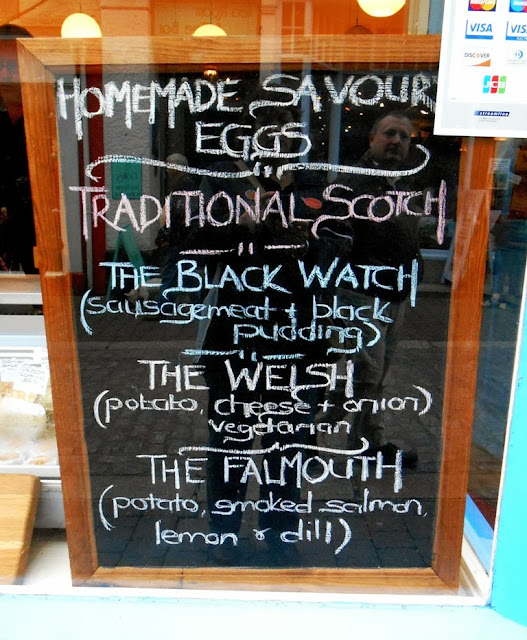 The origins of the scotch egg seem to be contested territory with many people espousing the 'invented by Fortnum and Mason' line.  F&M themselves lay claim to it, quoting 1738 on their website, although it's not backed up by any actual history pages.  However - a little further research tells us it may have been the name that came first, referring as it did to a preservation process used back in the 18th and 19th centuries, and the encasing in meat / whatever that came later.  *This site explains the preserving method using lightly boiled eggs dusted with a lime-powder disinfectant that was utilised to enable the eggs to be shipped from Scotland to London without spoiling.
A written recipe for the meat encased version first popped up in 1807 (in Britain anyway) and at this time scotch eggs were served hot with gravy as part of a meal.
[I mentioned this to the chap and he was roundly disgusted by the idea; which goes to show how much our preconceptions of what is 'normal' affect our thinking sometimes.  Meat and hard boiled eggs served hot with a sauce shouldn't seem odd surely, but put them in that particular combo and all of sudden our culinary conventions alarms are all shrieking.  I digress...]
Interestingly the info on that website also includes a recipe from the 1861 Mrs Beeton 'The book of Household Management' which indicates it was perfectly normal to make them with anchovies instead of pork.  This was another idea which greatly offended the sensibilities of the chap...  (Should you wish to try this - I might - the 'Forcemeat recipe No. 417' can be found here - scroll down until you reach it.)
The other strong contender for the origin of the idea, although not the 'scotch egg' moniker, seems to be the Indian version called Nargisi Kofta where the egg is cased in spiced lamb.  This was brought to India from Persia and then presumably found it's way to us in the empire days.  Tellingly this ties in with when F&M claim to have invented the scotch egg.  (In the book 'Delights from the Garden of Eden' it's mentioned that meat encased eggs existed in medieval times in Persia.)
Some of the other theories are rounded up here, for anyone not already over-satiated on scotch egg facts.
(I admit I tend to overload on info in a compulsive way before trying new recipes out; in this way I hope to get 'the' definitive idea of what something should be like before attempting to create it.  High falutin - much?!)
Anyway - whatever the history there now seem to be multiple versions out there, from the black pudding encased Manchester egg invented in 2010 (with optional salt and vinegar crisps crust) to the Worcester egg (pickled in worcestershire sauce) to the previously mentioned multitude of veggie options to a 'Geordie egg' which utilises both black and white pudding.  I am trying to come to a conclusion on what to try first, the veggie options range from bean crusts, soya mince, falafel or rice so there's plenty of scope for a little kitchen experimentation.  I do fancy trying a fishy version though - if only the shop in Falmouth hadn't been sold out of that one...

*'The Foods of England' site is a gem with the very worthy mission of finding the story behind all traditional English foods ever!  They also have copies of many early recipe books including the c1390 vellum roll 'The Forme of Cury' (=Ku-Ury - ie cookery) written by the Chief Master Cook of King Richard II.  I find it an absolutely fascinating resource.  Mind you I do like my obscure old recipe books; I love the social history you can glean from them as much as the crazy sounding (to us) recipes.  :-)
Posted by Ruthdigs at 11:14