Meat Cooking for the Faint Hearted #6 - Bacon and Beans

This is the kind of warming dish I've wanted to try out on/for the Chap for a while now.  I finally made it prompted by my bargain purchase of 3 tins of cannellini beans for 99p at a newly opened 99p store close to
us.  This makes it tick the 'frugal' box and the usage of whatever veg you have in that needs using up makes it even better as a cheap meal.
I did a little scooting about on the t'internet and came up with the below; mostly influenced by and adapted from this recipe.

Bacon and White Beans
Lump bacon - you can get cheap mis-shape packs in S'burys and butchers.  (I forgot to weigh how much I used but you can use rashers instead, as much or as little as you like / your pocket dictates.)
1-2 cloves garlic (to taste)
1 small onion / half a whopper (that's what I had)
1 carrot (or a stick of celery or both)
1 can beans - drained and rinsed (I used cannellini but white beans of your choice will do)
250ml stock (I used veg, you could use chicken if you have it)
Black pepper
Sprig Rosemary
1 bay leaf

Chop the bacon into lardons or leave whole if using rashers and chop after cooking.  Fry off the bacon in a heavy based pan - I used my cast iron one person sized casserole.  Fry until crispy then remove but leave the fat in the pan. 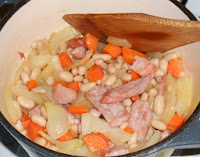 Add the sliced and rough chopped onion, minced garlic and the diced carrot and cook for a few minutes until softened.  (I used carrot as I didn't have any celery in the house but use both or either or neither -it's not a real picky recipe.) 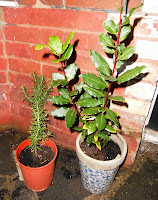 Add the beans and bacon and cook for a couple of minutes whilst you nip outside and get the herbs - these are mine by the front door.  Or use dried of course.  :-)
Scrunch up the bay leaf a little and chop the rosemary finely if using fresh.  Add to the pan with plenty of freshly ground black pepper.
Add the stock, stir well and whack up the heat to bring to the boil.  [At this point I realised I forgot the garlic so chucked in a good half teaspoon of garlic granules instead.  Doh!] 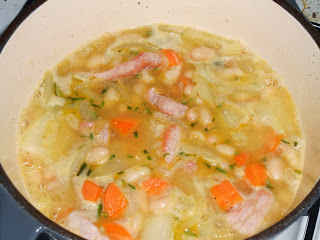 Reduce the heat and simmer covered for half an hour, stirring occasionally.  Then uncover and simmer for up to a further 30 minutes stirring more often to ensure it doesn't catch on the bottom.  It may not need the full 30 but do it for as long as it takes to get to a nice sticky consistency.  Adjust this to your preference, leave it more soupy if you like, everything's well cooked by now.
Serve with some fresh greens on the side and watch the Chap wolf it down - he professed it to be lovely and ate the lot at one sitting!  :-)