This month’s country for ‘Bloggers Around the World’ by Chris over at Cooking Around the World is Greece.  Now this is one of my fave  blog challenges but sadly I have not managed to enter for a few months but, as it was I that suggested Greece, I really really am deffo going to get at least one post in for it.  Kinda feel I should!
That said, as my failure to take part in the other months has been due to time constrictions (either in making the dish or in posting it having made it – now that’s really irritating) I decided to start with a quick snack style option and see if I can get more of a main course in later in the month.  --As I’m now posting this at the very end of the month the obvious answer to that was no.  L  Doh!
Now I had intended to serve these tomato pancakes/fritters/keftedes* with a nice authentic Greek hummus to dip into.  Until that is, I started doing my research and found that hummus isn’t really Greek.  It’s most likely Middle Eastern in origin; although it does seem to be one of those things that’s gets argued about, but the earliest reference found for it is in Egypt (13thC) and the word Hummus is Arabic for Chickpea which seems fairly conclusive to my mind.
So - a little crumbled feta and some tasty olives would have to do the trick instead.  Hmm – where did that feta go?  One day it was in the fridge and the next – poof – it had vanished in a puff of (Halloween) magic!  Must have been the really big fridge dwelling mice the Chap tells me we have.  The ones that leave human sized bite marks in blocks of cheddar… !!  I settled for some shavings of goats cheese with the olives instead.
*I came across this recipe first on the BBC Good Food website then found it on the original blog.  [I've asked the blog owner for permission to post the recipe but had no response but the blog has been dormant for the last 3 years so I’m going to post it anyway, especially as she said a Greek lady gave her the recipe in the first place.  Plus I made a couple of small tweaks.  Still with me so far?!]  It’s called tomato pancakes there so I tried to find the translation for ‘pancakes’ into Greek.  Hmm – I don’t read the Greek/Phoenician alphabet though which came up with τηγανίτες or κρέπα, so after a little more pottering on google it seemed that keftedes was a close approximation to fritters/pancakes.  Having seen several very similar recipes to this that termed them fritters instead of pancakes I think it’s ok to adopt this term for them.  [Quite possibly any Greek person reading this is wincing at my torturous mishandling of their fair language though as it really isn't ok to use ‘keftedes’ in this way, if so my apologies to you!]  Also my apologies to anyone who just waded through this paragraph and wondered what the point was.  Believe me – I often wonder the same myself when I've been wittering on at length without appearing to get anywhere!
However; we have got to some beautiful warm islands in the blue blue sea and come upon Greece.  I haven’t yet been lucky enough to visit Greece but it’s on my definitely-want-to list.  I imagine the tomatoes there to be bursting with fresh flavour and that these simple little pancakes are a joy to eat.  Here’s how to make them: 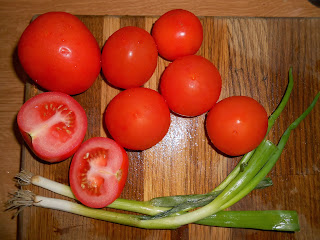 As some of my toms were on the small size I used 6 for the recipe so needed all the flour.  Add up to 100g first is my advice then add the rest if needed.
Slice toms in half round the ‘waist’ – this makes them easier to grate than slicing them top to bottom I found out after the first attempt!
Grate into a colander over a bowl to catch the juice.  (Use this up in soup etc.)
Finely chop the spring onions and mix into the toms.
Beat the egg and whisk into the mix.
Sift in the flour and beat in bit by bit.  Add the seasonings and beat in well too.  Add enough flour to make a thick batter – preferably sans lumps; unless they're the tomatoes! 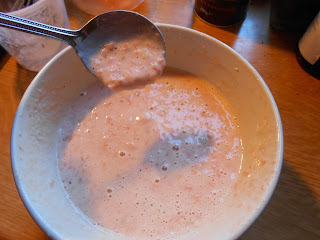 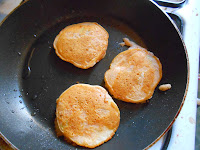 Heat oil in a non-stick frying pan and cook in spoonfuls – 3 to 4 at a time depending on the size of your pan.  Cook until golden – they must be cooked through or can be a bit nastily mushy as the tomatoes are naturally full of moisture.
I tried these on the bloke and he said they were ‘ok’.  Damned by faint praise!  I did tend to agree with him though.  I think the issue is that as aforementioned the toms in Greece are probably rather more flavourful than those here, especially at this time of year.  So – use lovely vine-ripened ones of the best quality would be my advice.  Oh – and don’t skimp on the salt; tomatoes are one of those things that really need it to bring the flavour out. 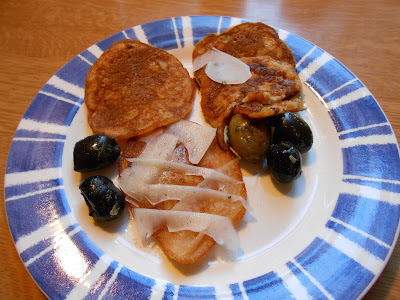 Eating these with the olives worked really well though so I think they are one of those things that contrast well; provide a good foil for something with a bit more depth of flavour.
So – a tasty relatively quick thing to knock up but make it in the summer when the toms are at their best.  Enjoy.  J
Posted by Ruthdigs at 15:28