Still here and happier than ever in 2015! 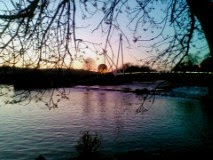 Well here we are nearly half the way through 2015 and not a single blog post to be seen from me.
Well really - what a very poor show!!!  ;-D
Back at the start of this year I made one single resolution (that's one more than normal) and it was to be more selfish.  More selfish with my time where it concerned people who sapped the life from you, more selfish with myself round people whose endless negativity drags you down, and more selfish in pursuit of a lasting happiness for me.
That is not to say I immediately set off on some sort of hedonistic crusade and forsook all my friends.  In reality only a few things changed, but key was deciding I deserved more of my time.  So to that end; and this is all a bit of a roundabout way of saying it, blogging has taken a backseat along with a few other things.
So what have I been doing?  Applying for work, a little bit of temping, some sorting out of the house, and (this is the biggy) telling the man I fell in love with 22 years ago how I feel!!!  Now that was somewhat scary, but it was a gamble that paid off.  Turns out he feels the same, right down to liking me back 22 years ago.  Who knew??!  (We were both far too shy to do anything about it then.)
Now the practicalities of this are not exactly straight forward, which is why I've never admitted it to myself before, let alone him.  He's in Aberdeen.  I'm in Exeter.  These are more than the Proclaimers famed 500 miles of walking apart.  Doh!
He came to visit for a week and with that time together we both realised we were more sure of this than anything before, so we will make it work.
We had a fab week, even though the weather wasn't all it could be, and his friends have already been asking when he's transferring down here!  That's all for the future though.  In the meantime I'm just as happy as I could possibly be, and it's truly wonderful.

So in other news; I have been doing some more temping and am currently on a 2 week assignment as a telephone receptionist.  In between calls though they are happy for me to potter around on the t'internet hence me taking the time to write this post.  Pretty decent of them I'd say.  :-)
On Friday I attended 2 interviews through a different temping agency and, (wait for it) have definitely secured at least one of the positions!  The lady from the agency is calling me back with full details later but apparently they came back with a big 'yes' to me after my interview.  Which is nice considering I'm very out of practice and was physically shaking going into it!  Perhaps a little more faith in myself wouldn't go amiss!  This may mean that I can't get up to Aberdeen as soon as I might have wished to but I will have to wait and find out as the company in question was advertising both 6 month fixed term contracts and permanent positions.  Exciting stuff though, none the less!
One of the other major decisions I have taken is to give up the allotment.  The friend I was helping bowed out at the start of the year and I have come to realise that a full plot on my own is just too much.  Instead I want to concentrate on the much neglected back garden at home.  Although small it's plenty of space just for me and has the advantage of not requiring me to tramp along the road with tools or a wheelbarrow en route to do a bit of digging.
Otherwise I've been busy in the kitchen - a lot of noodles have been consumed recently as I've been getting right into the Cheung Fun (flat rice noodles in rolls) they sell fresh in my favourite Chinese
supermarket.  I also discovered recently what bamboo shoots look like before they're sliced - crazy huh!
My family came to visit for the annual Exeter Festival of South West Food and Drink.  Saw many lovely things, sampled some of them and bought some cheese.  A lovely time had by all. 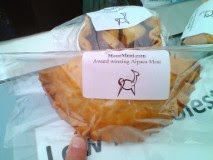