Well - if anyone out there pops in with any kind of regularity you've probably seen me mention CSH - the Cottage Smallholder blog and it's attendant forum; before.  This disparate group are a great bunch of friendly people who share interests in making your own, baking your own, growing your own, sewing your own, brewing your own and drinking your own.  [hic]  :-D  Also the keeping of chickens, the finding of bargains on the CFC et al are favoured topics.  Well - a while back someone suggested we took over Danny and Fiona's place for the weekend had a meet up - a grand idea we all shouted and promptly charged up country.  Well - not quite.  After a few weeks of wrangling the time off and organising the picking up of a fellow forumite en route we were off.  We stayed with the Chap's brother on the Friday night after first meeting our pick-upee [I know that's not a word] for a quick 'hello' pint in Reading.  Saturday we were up bright and early to nip back into Reading and pick up 'Sumprat' - the man who would be demo-ing the arts of home smoking at the meet up.  [That's smoking as in fish, meat, garlic etc.  'Fnar' indeed!]  En route to his we also nipped into Halfords as the Chap had realised he didn't have the plastic bung for the airbed on which we would be sleeping that night anywhere within the discernable vicinity.  Nor indeed a pump.  Hmm - rather pre-requisite items one would have thought when contemplating repose on an air bed for the night...
After a wee bit of a drive (you can rely on the M25 to induce impotent total rage at any time) we were finally passing through Newmaket and nearing Chevely; our final destination.  A lovely little village; Chevely is composed of some thatched and some charming old brick cottages with some fab brickwork chimneys to be seen.  The CSH nerve centre came in site and the Chap pulled the van onto the gravel drive.  Danny and Fiona appeared with welcoming smiles and hugs and we were immmediately at ease feeling amongst friends.  We profferred our addition of cheese-various to the groaning table of provendar on offer - no one was going hungry this weekend!  We took Dorset Blue Vinney, Cornish Blue and the Sharpham Rustic both plain and the chive version.  On display were many delicious goodies including fab home baked cakes, homemade fudge, Fiona's scrummy Polenta Bake, various salads and this fantastic creation made by 'Mrs MOS' in honour of the occasion. 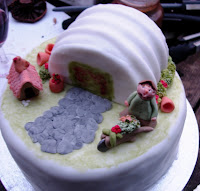 We repaired to Danny and Fiona's beautiful garden.  This is split into several 'rooms' each leading one from another and all lovely.  I want to share some of the gorgeous little cameos that caught my eye.
A tumbling rose blooming over the archway in the hedge leading from one area to the next. 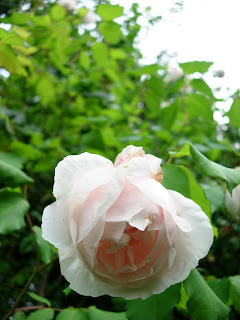 The lovely established pond full of life, and a closer look at one of the lilies. 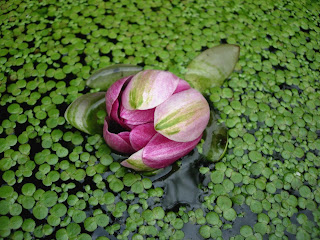 Much chatting, beer drinking, laughter and joy followed as we spent the rest of the evening being gently smoked out by Sumprat's home smokers - firstly a fab invention comprising a big metal stock pot rescued from a skip, an inner basket for it and a probe thermomenter inserted through a hole drilled in the lid of the whole affair.  This was the cold smoker - we tried some mushrooms in there - quite tasty indeed; and then some garlic - smoked garlic is ace!  Sumprat also smoked some chillies in it and served up smoked nuts still warm - these were great. 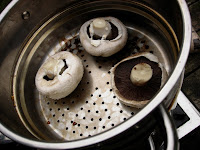 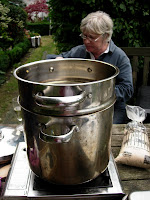 He then cranked up the hot smoker and served up a platter full of smoked fresh mackerel fillets - yum!  We also did some hot smoked garlic - so it's cooked as well as smoked.  Great stuff!
The MOS's had kindly brought some of their really rather good sloe gin for everyone to try [ours was polished off ages ago but this year I'm determined to have multiple batches on the go] and I can testify that it was damn fine stuff. 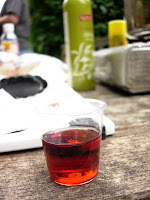 Once the smoking was done the BBQ was fired up.  Danast had brought some steaks down from Scotland and the Chap was overawed by how good they were.  He said it melted in the mouth and was most definitely the finest steak he's ever had.  [Danast - here's your chance for a plug for the steak provider!]  We eventually headed bedwards; lulled by the quiet strains of the all night rave opposite to the cottage.  *rolls eyes*
The next morning brought the much anticipated 'White vs Black pudding / Scottish vs Irish fry off' which I didn't partake in but the Chap did and enjoyed them all, though admitted to preferring the black pudding but not one side of the Irish Channel over the other.  [You can find further details here on the CSH site.]  We were then showered with gifts from amongst the chilli plants, seeds and cakes that had been brought and Fiona also gave me some veggie pasties which were lovely, along with chutney and a beautiful lavender bird that was a little tardy in winging it's way to me earlier in the year.  Most unexpected but really touching and now has pride of place brightening up the kitchen.

Many hugs were exchanged and photos taken and we set off on the long route home.  Once more the M25 was fully stationary - this time on the slip road with some fools deciding to reverse back up; followed by some even bigger fools turning round (yes - turning on an M25 slip road!) and driving back up only to seem slightly surprised that they couldn't get out at the top.  [Mind you if you're that dumb I guess most things in life come as a surprise - the sun coming up every morning, the appearance of the moon etc... cretins.]  Having managed not to be killed by any of these idiots we eventually pulled up in Reading to drop off a tired but happy Sumprat and resumed our journey southwards. 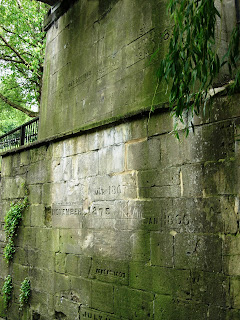 Feeling a little peckish by this point we took a detour via Bath and had a mediocre Italian [the starters were great, the mains not so much - odd] and a small wander to stretch our legs.  I liked this wall next to the river with the water heights and dates carved on from various floods over the years. 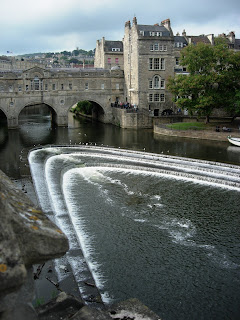 Here's the classic view of bath - the river drops down through the centre of town; it's pretty idyllic.
Wearily we returned to the trusty van for the last stretch home - fairly uneventful though we followed a classic rounded 50's looking winnebago for some time down some lanes where it really took up all the space.  They pulled over to let us pass and gave us a cheery wave to which I waved madly back.  :-)  [People were pausing in their gardens to grin at it going by - isn't it great how old classic cars and such like can put a smile on peoples faces?  There's a passage on that theme in Iain Banks's rather good 'Raw Spirit' in which he tours various whisky distilleries.]
Eventually however we pulled up at home and there was one last task to do - scare the Chap with the mileage we'd done over the weekend.  Ouch!!  Bring on next years meet!!  :-) 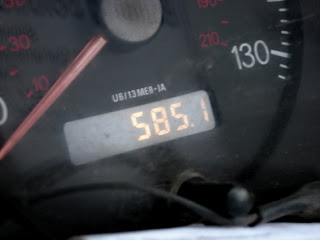