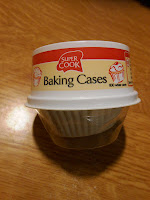 Having woken up just past the 3am mark on Monday morning and having very quickly recognised it as one of those times that the possibility of getting back to sleep was most definitely negligible (and this on a bank holiday.  Truly I must have done something awful in a previous life!) , my thoughts turned to baking.  As they do at 3am eh?!  I had been meaning to make a batch of buns / muffins whatever for some time for one of the Chaps work colleagues in return for a box of unopened store cupboard type things he gifted us when he moved including a full sealed bottle of EVOO, various herbs, a similarly full and sealed jar of curry sauce, some tins of chopped tomatoes, some cake cases and a sealed bottle of white wine vinegar accompanied by the immortal words - "You have it - I won't drink it"!!!  Part of the deal was that I filled the cake cases and returned them to him.  Not being someone who does an awful lot of baking I do have to be in the right mood for it.  As it seemed I was this morning I finally hauled my weary self out of bed around the 4am mark to embark on a spot of 'Baking for Insomniacs'.  (I think we need a catchy little tune there - if possible played on one of those tiny electronic keyboards you used to be able to get in various pastel shades back in the mid-late 80's.)
So - firstly a quick trawl of the recipe books as I really wanted a simple recipe without lots of faffing about.  Well - I say firstly - actually firstly was more like- trot downstairs and casually flick on the light switch without thinking about it then spend the next 30 seconds clutching your tear stained face whimpering 'my eyes, my eyes' quietly so as not to wake the Chap up.  Durrr!
Having recovered sufficiently from that to read the sodding recipe books I pulled 'Easy Cooking - Baking' off the shelf and had a quick leaf through the cake section.  Although I tend to make small individual buns/cakes rather than 1 big one there's nothing to stop you using a big cake recipe for little buns - just remember they will take less time to cook.  I adapted their recipe for honey cake; their's was topped with almonds which I didn't have plus I tweaked the spice amount; and I used this to make small buns on the basis that the recipe sounded like it would be nice plus it was an easy one to do and therefore should be fairly quick as well. 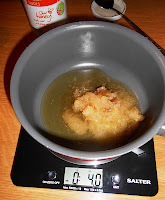 4oz honey - they specify clear - I tend to use the S'bury basics runny stuff for baking which does happen to be clear but I can't imagine it matters that much.  Incidentally I found the easiest way to measure this out was to put the small pan I'd use to melt it in on the scales, zero them then weigh it straight in.  Just don't go too fast so you don't get too much in.  As you can see mine was somewhat crystallised but don't worry - the melting will fix that.
6oz plain flour
0.5tsp Bicarbonate of Soda (I upped this as I realised on getting the bicarb out of the cupboard that it was in fact out of date and I know this impairs it's efficacy.  I also know that too much can give a nasty taste so I added another scant 0.5tsp and it was fine.)
1tsp+ mixed spice
1 egg (They said medium, I had large)
2tbsp milk

Preheat oven to 150c.
Melt butter, sugar and honey together.  You don't need to get the sugar totally melted but the butter should be so it all mixes together well.
Sift the dry ingredients together.
Crack the egg into a cup or similar and add the milk and beat together to mix well.
Make a 'well' (if you're new to baking pretend you're making a volcano shape complete with crater) in the flour in the bowl and pour the butter mix in.
Gradually stir in the flour pulling it in from the edges.  As with many other recipes this one specified using a wooden spoon for this.  Now - having done a minimal amount of googling on the matter I see that there are circumstances where a wooden spoon would be necessary as opposed to a metal one.  (Hot sauces, acidic ingredients &c.  More info here amongst many other places.)  I can however see no need for it here other than the somewhat hazy notion that the rounded edges are gentler on the ingredients than a metal spoon's edges would be.  Whatever the pseudo science / old wives tale behind it I did make use of a wooden spoon and mixed the stuff together. 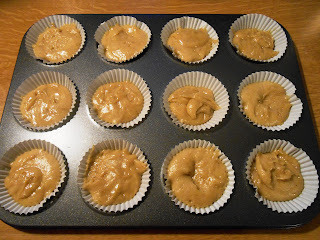 Next beat in the egg mix so it's all well mixed together.  You end up with a fairly liquid mixture which I then glopped into individual bun cases; fill each one about 2/3 and check at the end they're all more or less equal.  This recipe makes 12 regular size buns.  IE not the massively oversized muffin style cases that seem to have taken over these shores in recent years.  When I was a kid it was a fairy cake or for special a butterfly/angel cake where you took a circle off the top of the cooked bun and cut it in half and stuck it back in on opposed sides like wings with the aid of a little butter icing.  That was for special occasions only though.  We didn't have a head sized wodge of undercooked chocolatey sugar rush available at the drop of a hat then.  I'd imagine as a country we were also rather lower on the world index of obesity as well.  Make of that what you will.  [Clambers down off high horse.]
Bang them in the oven and sit back for 12-15 mins.  Test with a skewer once they're a nice golden colour and leave in the bun sheet to cool for a few mins before removing and popping them on a wire rack to cool fully. 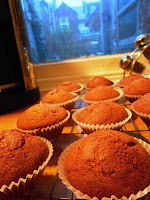 Verdict - well I had to try one didn't I.  I liked these as a simple little light bun.  The honey wan't the most obvious taste - perhaps as I'd upped the spices but I didn't feel they were too overpowering either.  Just a nicely deep taste to them from the combination of honey and spices.  They were also nice and quick to make without the creaming step that's in a lot of recipes so if you're in a rush these are suitably time-frugal.
Verdict from the recipient was received via text: "Thank you for my cakes.  They're well yummy!"  I'd say that's a win.  :-D
Oh - and this is what you get when trying to photograph the finished product so therefore not paying nearly enough attention to your resident furry Zeke.  Think he's checking out the cool retro *plate too? 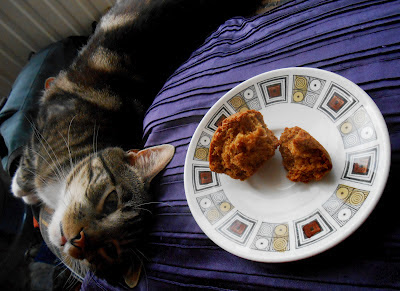 * These are bona fide old plates we used to use as a family.  I rescued the last 2 of them from the parents garage a year or so back where they were retired and had been relegated to plaster mixing and plant drainage duties.