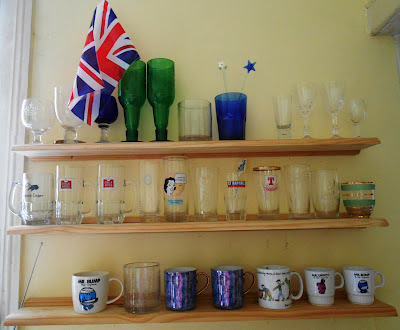 Today the Olympic torch left Exeter at 7.25 this morning to continue it's journey round the UK before this years Olympic games in London.  Although I had previously planned to pop along before work to cast an eye over the proceedings (incidentally it's very hard to maintain the pre-requisite level of world wearied jaundiced coolness whilst simultaneously waving a flag, jumping up and down and going 'squee') my ongoing illness prevented this so, as mentioned, the flag and myself stayed home.
I am attempting to work from home today which would normally be totally do-able.  Unfortunately sitting at my pc at home is not comfortable at the moment so I am struggling somewhat.  Also; having notified my boss this morning I wouldn't be in she started discussing what she wanted me to do today 45 minutes before my normal work start time!  I had hoped to inform her that I would work from home as well as I could and then be able to get a little sleep in after taking this mornings painkillers, before then starting work as I spent nearly all of last night trying to find a comfortable position in which to snatch a few moments of rest.  Tsk...

Anyway - the bit of positive news is that apparently it isn't pleurisy, which can be pretty nasty.  It appears that I have instead damaged my intercostal muscles that are between and around the ribs whilst having at the same time pulled the muscles in my back.  Apparently this can take some time to heal as well as being pretty painful and awkward with your breathing (I can certainly attest to that!) so I have to keep taking the painkillers and rest it to let it heal itself.  We know this as I went to the walk-in centre in town yesterday being sick of still being in pain without knowing what was wrong with me.  The nurse there listened to my chest and sent me to the hospital.  After being seen by the doctor there she called through to check on my x-ray and they reported that it was clear so we finally knew that it wasn't pleurisy.  About time!  She prescribed me codeine to be taken in conjunction with paracetamol and the Voltarol (diclofenac) I've been buying over the counter.  Apparently these 3 in conjunction should give me some relief.  Hmmm - not totally convinced yet I must say.  Hey ho - at least we know what we're dealing with.  I'll just have to wait for the next Olympics to get the flag out again... 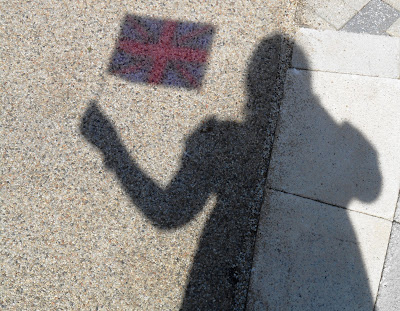