Recently it came up during a routine check that I had slightly high blood pressure. It had apparently been this way often enough over the preceding 12 months to flag up as needful of further investigation. Whilst it probably doesn’t come as much of a surprise to those who know me that my blood pressure should be high it caused me some worry – exactly what you don’t really want if your blood pressure is already high! Anyway – they tasked me with keeping track of it (I borrowed a monitor from my boss of all people) and getting it checked again in 1-2 weeks, then another 2 weeks after that if it was high again, then a referral to my doctor if it should still be reading high then. I went and researched food and drinks that can help lower blood pressure and found celery, broccoli (calabrese), low fat dairy, pomegranate juice, cold water fish, beetroot juice and oats amongst others have all been shown to help in various ways.
Well to cut a long story short all my efforts seemed to do little to affect my blood pressure at the clinic although at least some of my home readings were well within the ideal range. There is something called ‘white coat syndrome’ – because you’re stressing about having your bp taken at the docs this very stress causes it to go higher. Whatever the cause may be I ended up in the position this Wednesday of having to see my actual doctor for my bp to be checked as a result of this process. Now I’d managed by this point to get myself in a wee bit of a tizzy over this so as I crossed through the park on the way to the clinic I felt more like I was going to have judgment pronounced upon me for some nameless heinous crime rather than see what she said about that days bp reading. (I know – seems silly and totally out of proportion but as someone who has never been seriously ill, nor broken any bones nor even stayed overnight in a hospital except for when I entered the world I have a vast untapped lake of drama to draw upon in such matters.)  I went through the park and in the morning sun decided to cut across the grass in my flip flops. The grass was wet and as I felt the dewy blades swoop over my feet a smile inched onto my face. It probably helped that this was what seemed like the first sunny not-raining morning we’ve had in what feels like at least 2 months! In fact cutting over the grass made me slightly late as I lost a flip flop 4 different times due to my feet getting so wet but this small thing calmed me immeasurably and made me feel alive in a way that the coldest/wettest April and May on record here in the UK hasn’t done so far this year.
Anyway – the doc seemed a lot less concerned about my bp than the nurses I’d seen for the previous checkups had been and I left feeling much buoyed up. Whilst there I had also mentioned the evil cough I’ve been suffering from for 4 weeks now which has caused me to pull a muscle in my back the previous week then once that had healed something in my ribs was hurting rather. She listened to my lungs and said she thought this could be ‘a small bit of pleurisy’ which I have to admit to being ignorant of at that point. Anyway – back I came through the park snatching a few moments to admire these fresh faced flowers and off I went to work. 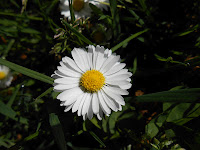 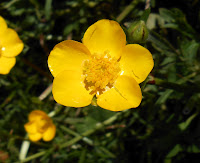 At the end of the day I had yet another coughing fit and suddenly felt the pain in my chest worsen sharply and at the same time I felt the muscle in my back go again. Ow ow ow!!!! After an intensely uncomfortable night which garnered a bare 2 hours of sleep and that with the help of varied pain killers, I steeled myself and went into work. This was a very bad idea as even though I was sparing my right side – where both the chest and back pains were sited opposite to each other on my body, it was getting jolted with every step I took. By the time I attained my office I really was in a lot of pain and was instructed by my boss after one look at me to call the docs and NHS direct for advice. I ended up talking to nhs direct first having filled out their on line diagnosis tool. After a lot of questions designed to allow them to rule things in or out she advised me to see my docs or a walk in centre again even though I’d seen my doctor only the previous morning. Her opinion was that it was either pleurisy or the inter-costal muscles (that are inbetween your ribs) and that I could have pulled these in tandem with the muscle in my back. ‘Ace’ think I in an unnecessarily sarcastic manner probably, but I was a bit grouchy and thoroughly regretting going into work by this point. 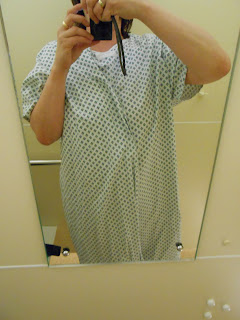 I called my doctors to be told there were no appointments but that the emergency doctor would call me as he always preferred to triage people over the phone before booking them in. He duly called and did a very good job of appearing pretty disinterested and dismissive. He scoffed at the idea of me having developed pleurisy 'overnight' though I did try and point out that this was what my own doctor had mentioned to me the previous morning. End result was – I was sent to the local hospital for a chest x-ray. Feeling somewhat shunted about now I caught the bus up there, stumbled painfully along the endless warren of corridors and eventually got x-rayed in a truly fetching gown thing. Pah. I was then told ‘that’s it – your doctor will get the results in 5 days.’ Oh – thinks I – so the point of me coming here today was what precisely??? What a waste of time, expense and resources. The dismissive doctor called me back later to see what they had said and I didn’t bother hiding the unimpressed-ness in my voice when I told him they had said nothing to me other than that the results would be with my doctor in 5 days. ‘Ah’ – he reassures me – ‘if there had been anything serious to worry about they’d have had a conflab then talked to you.’ So the upshot is A) I still don’t know whether I have pleurisy – an infection that could be treated with antibiotics and save me all this pain and as of today; time off work or just damage to my muscles in which case keep taking the painkillers and B) I have had a totally unnecessary x-ray at needless cost and rendered useless by dint of the timescale involved needed to get any results. Also C) I am still in considerable pain – even when not moving it hurts constantly and it hurts to breathe and I am unable to determine the best course of action as I don’t bloody know what’s wrong with me! Considering the nhs direct woman told me they could tell if it was pleurisy or the muscles just by listening to my chest and lungs I’m pretty peeved off with the dismissive doctor for not taking this course of action. So – I now have to wait and see. Although the weather has once again gone grey I will continue trying to find some small joy in the little things like these spotted at the hospital and in the park. 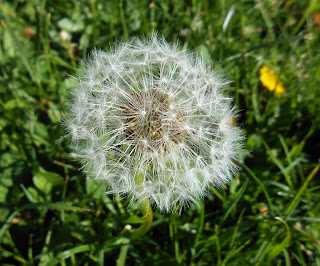 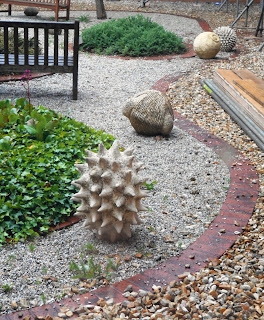 I am also well aware that there’s a massive proportion of the population of the planet that is worse off than me in all sorts of ways and that this post is essentially one long whinge. Sorry – but hey, don’t forget –it’s my blog eh?! Lol. Just bear with me and hopefully normal breathing service will resume shortly. :-)
Posted by Ruthdigs at 17:12