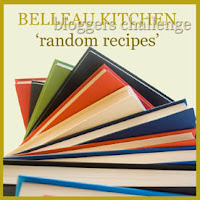 This month's Random Recipe challenge as set by Dom over at Belleau Kitchen was to use our birth date number to count books from one end of your cook book shelf to pick a book, then to pick a recipe at random from said book.  My birthday is on the 22nd so we were going to end up midways into the shelf somewhere.  Apparently it didn't matter which end you counted from; as Dom had gone right to left I did the same and ended up with.... Oh - one of only 2 books (at the time, he's had a birthday since) on the shelf that belong to the Chap not me.  Huh - oh well.  An extra layer of randomness.  (Out of interest at this point we both counted from the other end too and we ended up with the second of his 2 books.  Huh again.)  Anyway the book was (drum roll please) - Simon Hopkinson's 'Roast Chicken and Other Stories'.  This was in fact a gift to him from my big sis last chrimble and I'm not sure we've made anything from it yet.  It proudly boasts  it's 'the most useful cookbook of all time' as voted by 'Waitrose Food Illustrated' on the front cover.  Reeeeaaaalllly.....
So - I gave the Chap the task of opening it at random to find me a recipe.  Then I could blame him of course.  Not stupid me.  ;-)  The page is... ah - small hiccup.  It's the page describing (wittering on about) garlic.  No recipe here on either side.  Try again good chap, try again, we cry.  As the pages stop fluttering past I get a little jump of excitement - it says crab - one of my favourite things!!  Woop!!  Oh - it's just another 2 pages wittering with no recipes.  Huh.  So- third time lucky and.... well, presumably you've read the title and that is indeed what he managed to pick for me the swine.  Page 174 gives you 'Roasted leg of Rabbit with Bacon and a Mustard Sauce'.  Hmmm.  Now I know I've eaten rabbit at some point as a nipper but I sure as hell have never ever cooked it myself.  Oh well - that's why we trust the recipe right - they'll lead us gently by the hand right?
First things first.  Reading the recipe immediately apprises you of Mr Hopkinson's somewhat didactic style.  You should use French Farmed rabbit he decries.  "A wild rabbit will not do" he sweepingly states.  Well tough boyo cos that's what I can get I'm afraid.  This book was first published back in 1994 so perhaps you could nip into your 'enterprising' butchers (his phrase) back then and buy a) just legs and b) specify that they are not only French but farmed none the less.  I'm not entirely convinced you could unless it was just at the 'enterprising' (read 'hideously brow-beaten') butcher that had the misfortune to ply his wares nearest Hopkinson's casă but no matter - I'm getting my rabbit - legs plus rest of body attached - from a local butchers here in Exeter.  They do rabbits at £2.99 each or 2 for £5.  For some reason I bought 2 - I can't help it when it's better value.  All those HFW programmes telling me it's a great frugal meat with the best free range existence (true for my wild examples) were obviously shouting strong in my subconcious when I was discharging my rabbit purchasing duties.  Not sure it was a good idea but hey ho.  Anyway - I digress.
So - having failed entirely to buy just legs I now needed to detach the desired appendages before I could start on the damn recipe itself.  (Are you picking up that this experience was no picnic??)  Google to the rescue - gave me this page from the Guardian.  Looking at the picture it appears I'll learn how to detach the wings from my skinned little bunny angel.  I would point out the pic is 'upside down' (to our head uppermost conventions of thinking) in that those 'wings' are in fact the back legs - the bits I wanted.  I also however needed to do most of the rest of the instructions so the rest of flopsy could be put to good use feeding Chap and, worst come to the worst, Zeke.  So, not just meat cooking for the faint hearted but a crash course in bunny butchery.  Thanks Chap, your veggie/pescatarian girlfriend thanks you.  No really...
At this point I will let you know that's there're bunny butchery pics coming up.  If you, dear reader, eat meat and flinch at confronting these I shall be most disappointed.  That was me hacking bits off it so if I can manage that....  [High horse gives up and throws Ruth off in disgust.  'Don't woo the readers by lecturing them' he neighs.  Maybe.  Or maybe I just need more sleep.  Whatever.]  And yes - I will get to the recipe at some point.  Honest. Lay bunny out.  Flopsy has innards still intact.  Blimmin brilliant.  Extract innards.  Marvel at the ickle kidneys.  Be secretly disappointed when Chap refuses your kind offer of devilled ickly bunny kidneys and insists on 'gifting' them to Zeke instead.  Huh.
Remove legs as per Guardian instructions.  (The rib cage bit was a nightmare but I'll spare you.) We can now finally join the recipe I'm supposed to be cooking and writing up.  Longwinded - moi??!
You can find the recipe online here, albeit in an americanised version.  I'm reluctant to copy the entire thing out as it's not mine to do so with, so I'll give you the edited highlights.
Preheat oven to 220c / gas 7.
Mr Hopkinson's next instruction is to remove the thigh bone from the leg and is, I guess, calculated to reassure; stating as he does "This is only slightly tricky."
Totally correct. What he omits to mention is the essential and much more fiendishly awkward next step of detaching said thigh bone from the lower leg bone in order to remove it from the thigh totally.
The joint is very tight and I eventually had to stick the point of my knife in the very small centre section and force the joint apart at the same time as getting through the tendons.  This Flopsy has spent his life jumping and racing around outside therefore the tendons joining indiviual rear legs bones together are strong.  However, perserverence gets us there albeit with a renewed and lower opinion of Mr Hopkinson.
At this point I will fess up to having 'adapted' (messed up on) some of the ingredients for this dish.  The recipe calls for fresh tarragon which I hadn't got so I had already resigned myself to using dried. I was however smugly secure that we had a whacking great bunch of fresh thyme available to use; the other fresh herb the recipe calls for.  Err - where was that then?  Says Parsley here?  Got any of that have you?  At 5pm on a Sunday?  We'll use the dried Parsley as well then yes?  Oops.
After which the fact that I had back bacon instead of streaky seemed a minor point.  I know the purpose of the streaky is to ensure the naturally very lean meat of the rabbit stays moist by utilising the pork fat but the Chap hates fat on meat and trims it off back bacon so would not touch anything wrapped in streaky.  He was the one eating it after all so I let him have that one. Mix butter, garlic, [dried] parsley and tarragon and the zest of a lemon (or half - I halved the entire recipe) together with S+P and stuff the leg cavities with it.
Grease a baking tray.
Wrap the legs with bacon ensuring the rasher ends are on the underside, thus keeping them secure in the cooking process. Roast for 10 minutes then remove and rest for another 10.

At this point myself and the recipe parted ways; with I the adventurer in the uncharted random waters of attempting to make a mustard sauce intended to be composed from cream and Dijon out of; erm, no cream (gone off after defrosting - see last post) and (I'm ashamed to admit this so will do so in a small voice in the hope that you won't notice it flashing past and won't therefore laugh too uproariously at me) a single sachet of Heinz French mustard.  Oops doesn't really cover that one eh?* I tried using a little spoon of yogurt and a dash of milk instead of cream but after tasting it both the Chap and I unanimously voted it 'minging' and it was ditched.  Given the Chap's fat phobia he wasn't too happy about the idea of the cream sauce anyway so I made him a nice gravy by boiling flopsy's rib cage with a bay leaf, garlic, onion, carrot trimmings, etc instead; added some veggie granules and  mashed a couple of roasted garlic cloves in.  Job done.  I served it vaguely à la Hopkinson; cutting the prescribed 3 slices from the bulbous end of the leg and standing the bony end next to it but really went for the massive fail by not serving it with the 'suggested' (an unaccustomed laxing of the preceding levels of didactic pedantry) dish of plain boiled potatoes and green salad but instead providing Chap with a full on roast.  Which isn't in this photo as that would just be far too messy and detract from my fantastic (sarcasm) presentation; natch. So - a random recipe that had me hands deep in dead bunny, attempting butchery for the first time ever and (sorry Waitrose Food Illustrated) starting to really not rate Mr Hopkinson's usefulness at all.  It was - an experience.  However - Chap did declare the legs delicious to eat so I guess the recipe's not all bad.  Though if he thinks I'm making it again in a hurry he can damn well find me one of these 'enterprising' butchers I've heard so much about that'll sell me just the legs of flopsy...
*In my defence I would like to point out that we usually have Dijon, Whole Grain and English mustard in but I have a Chap that will happily slather half a jar of mustard on his beef joint before roasting it then eat it with the other half of the jar.  Means we sometimes unexpectedly run out of mustard mmkay?
Posted by Ruthdigs at 23:48