Ok, ok, that isn't technically correct as we did have a day off (mostly) from the rain on Friday.  The river fell so you could nigh on see the paths, if not actually pass along them without dipping your toes in but yesterday was a return to form with heavy rains battering us along with some high winds and up went the water again.  Here's a daytime shot from about the same viewpoint as the night shot in the last post. Anyone for a nice relaxing bike ride on a Sunday?  No??!  (Look at the size of that log!  If only we had a wood burner.  I'd be out after every flood scavenging the river banks for free fuel.) 'Welcome to soggy Exeter' that should perhaps read.
I think this little chap is wondering where his home's gone.  Along with a lot of unfortunate people in these floods.  Sadly a woman also lost her life locally when a tree fell which in turn took a wall down on top of where she was living in a tent.  Another example that if we as a society could take better care of all members rather than worrying about sh-t like what we'll be sitting on come crapmas day we'd perhaps all be a little bit richer human beings.  (What is it with this pressure of supposedly needing a new sofa for chrimble?  Will my old one spontaneously give up the ghost in shame at it's non-newness?  I somehow doubt it - it's managed to tough it out each year so far.  Piss off ad-men.)
I didn't intend this to be a ranty post so excuse the slight tangent; though I am asking no excuses at all for the content.
Anyway - a whistle round blog-land this morning has appraised me of 2 things.  Firstly, in a slightly suspicious coincidental way Blogger has apparently told several of the blogs I perused that they've run out of space and would they like to pay for the privilege of uploading photos?  It just gave me this message too.  Now, I know that the finite space they give you will fill up but the fact that they've all gone at the same time makes me think it's a ploy.  Plus someone had put a comment somewhere saying it's Blogger wanting to shift us all to another provider or something.  :-(  Anyway, no, I do not want to pay, especially to an online company that can't tell I'm in the UK and would therefore use a corresponding unit of currency so I am using Flickr instead from now on and uploading from there.  Or at least I am if there are images in this post.  If it's a bit lacking on the image front then I evidently failed to get it to work!  Hmm - you seem to have to add it as html code otherwise if you use the 'share' to blogger option it makes it a new post.  Slightly more longwinded but I'll cope with it.

The second fact I quickly caught on to is that it's 'stir-up Sunday' - traditionally the day when chrimble puddings are made.  (Having just skim read the wiki article I've linked there it actually appears to be a religous thing that has become associated and overtaken by the pudding thing.  Shows how much of a heathen I am that I had no idea of that I guess!)  Now, being somewhat lackadaisical in some areas I have yet to make our chrimble cake (having been inspired to by both Being Penny Wise and Frugal Living UK's frugal based versions) so I figured that with a month to go perhaps I'd better worry about that first.  Although when I think about it I probably prefer a very small pud rather than cake.  Never made pud though and it strikes me as something one ought to have at least a little forward planning for so it shall have to wait for next year, or the year after, or...you get the picture.  I'm slightly alarmed by the reminder that both those blog authors soaked their fruit for a week - mine shall have overnight and be grateful for it I think. 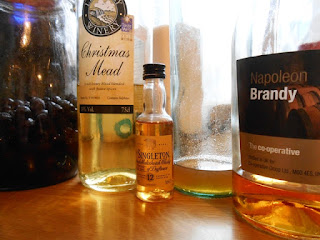 Given that I'm stealing some of the dying-from-man-flu (that I gave him) Chap's medicinal brandy to soak the fruit in, along with a mix of some in which he steeped spiced baked apple, a freebie single malt whisky and possibly some of this chrimble mead (though I'm not sure that at 13% it's up to the job.  Anyone?) I don't think I can really nick enough off him to last a full week!
Anyway, in keeping with their Frugal theme but with a slightly different bent I decided to make my cake only utilising what is in the cupboards already.  IE no new purchases.  Hence the theft of the Chap's brandy and slightly idiosyncratic line up of ingredients / booze that will be utilised.  That's another post though - right now I really must get the fruit and brandy in the bowl before he finishes drinking it all.  If that comes to pass I'll have to sacrifice some of the sloe gin instead.....  Noooooooo.........  :-D
Posted by Ruthdigs at 15:47