Happy New Year – it’s the Chinese year of the Snake. Wishing us all well for the year to come.  :-)
Yesterday I took a friend around various of the world food shops in Exeter. She’s wheat intolerant so was very happy to find certain items like Sorghum flour (apparently she has been hunting this down for 2 years!) and it was fun to show someone around the Exeter I know. As we went in many food shops it was kind of inevitable that I would emerge with a few more random items for me to try out on the Chap the Chap and I to try together. I had also recently bought a few things from my local Chinese supermarket for snacking purposes so thought I’d share them here. 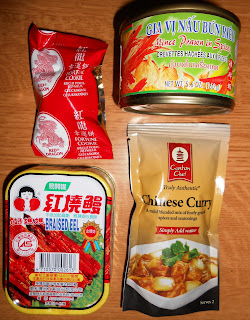 The 'truly authentic' Chinese curry (*snort*) I'm planning on having tonight, just to try, out of curiosity.  In that way that sometimes you crave cacky white processed bread which you normally wouldn't touch with your wholegrain barge pole I have a curious fondness for the Chinese curry you get in some takeaways.  I know, I know - I'm sure it's laden with badness but hey - I like it.  I'm going to use a couple of Quorn fillets in place of the chicken breasts suggested and see how it turns out.
The fortune cookie I'll open to see what this year of the Snake holds for me.
The tins of 'Braised Eel' and 'Mince Prawn in Spice' I thought could be interesting but have yet to try and these are what I got yesterday. 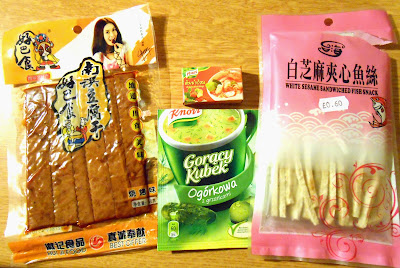 However - I did want to share the things I have tried with you and here they are.
The item on the left is dried bean curd.  It's pressed into something vaguely reminiscent of tofu but with flavour.  It has a slightly rubbery; although tougher than for example - raw mozzarella, texture that the Chap really didn't like but I do.  I eat these as a snack at my desk at work or chop them into noodles for lunchtime.  The one's I got professed to be barbeque flavour but were spicy with some chilli in and rather tasty I thought.
In the centre top we have some Tom Yum stock cubes - these are invaluable to add to cooking rice I find.  I've been on a bit of a tom yum kick for over a year now and show no signs of tiring of the zingy hot and sour flavours.
Below that is a 'hot mug' (literal translation) from a new (or new to me anyway) Polish deli that's sprang up at the top of town.  My Polish being totally non-existent I purely went by the pictures and used google translate once I got home to double check.  This is apparently 'cucumber with croutons' flavour but as the picture suggests - it's pretty much gherkin flavour.  Which sounds a bit wrong but I found surprisingly nice even with the 'creamed' edge.
Then on the right we have a pure spawn-of-the-devil (in my opinion) item.  'White Sesame Sandwiched Fish Snack' is kind of what it says.  Dried out fish pressed out with some sesame seeds in the centre cut into thin strips.  The texture is foam rubber.  The taste is that kind of nasty that means every couple of days you have to try it again just to confirm that yes - it really is that minging.  Some perverted part of your brain insists on telling you that you just can't have remembered it correctly and that nothing can be that hideous.  Pungent strong fermented fish taste isn't really my bag so these have been relegated to feeding the cat.  Who seems to enjoy them, the little freak.  So at least one of us is happy.  :-)
So - what does this year hold for me? 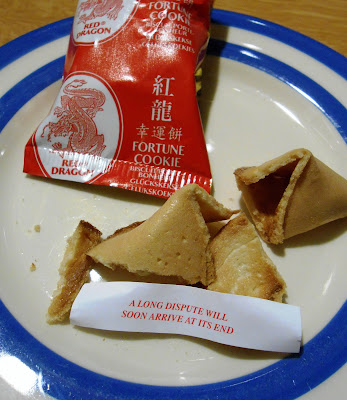