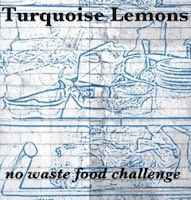 There's a No Waste food challenge set up over at Turquoise Lemons new for 2013.  Inspired by the 'love food hate waste' campaign Kate has come up with the spiffing idea of picking a common 'leftover' as the ingredient each month to use up.  This month's theme is preserves.  So I humbly offer - marmalade ice-cream.  I have adapted the original recipe but this came from the Observer Magazine colour supplement sometime in the late 90's; I think most likely to be '95-'97 but that's based on where it appears in my little notebook in comparison to where others are against my memories of what was in there when I went to uni and what got written in later.  If that makes sense. 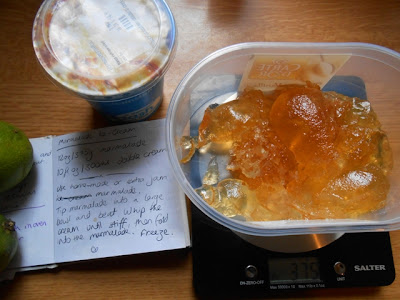 So with appropriate thanks to the original author* this is my adapted version.  I feel the original recipe which just used orange marmalade and cream could be a little too rich so I use lemon or lime marmalade, or both, plus fresh zest and juice to zing it up.  It will depend what you have in that needs using up though.  This recipe uses nigh on a whole jar.  It's super easy to make and pretty quick; it's also pretty cheap, especially if you get the fruit on Aldi's super 6 or just get the cream only.  Massively unhealthy so enjoy in moderation!
*With thanks to Phil in the comments I am now sure this was originally a recipe of Sophie Grigsons from 'Sophie's Table'.  Originally published in 1990 it seems to have a second edition in '98 so I'm guessing that's when and why her recipe was in the mag I saw it in. 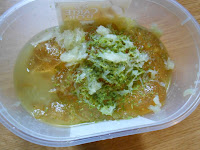 Put marmalade in a bowl or - I used the container I will freeze the ice cream in.  This recipe makes one of these standard litre-ish sized containers full.
Zest the limes in then juice them really well into the bowl / container.  I use the 'microwave for 10-20 seconds then roll on the counter top' method before cutting the fruit open to get the most juice from lemons and limes.  Squish the pulp in too - it all means more flavour and less waste! 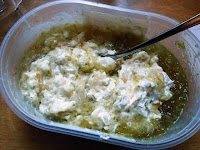 Remember that frozen foods dull the taste sense which is why recipes always call for more sugar and more flavour than you'd think in ice-cream.  So don't be worried if you think it's too limey - it needs it.
Beat the cream until stiff - I used my FP here, bit easier on the arm muscles!
Fold it into the marmalade.
Freeze. 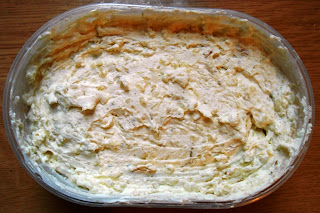 That's it - none of that beating every few hours to keep the crystals small.  Every time I've made this previously I haven't and it's turned out fine, I think because you whip the cream and marmalade first.  It can be a little on the firm side so I'd advocate removal from the freezer 10 mins before serving.**  Yum!

**Edit - it wasn't nearly as solid this time, I think because I used the whisk on the FP where I've done it by hand before so it was undoubtedly better beaten.  As it is now I wouldn't stand it for any time, and 10 mins would make it a bit too melty! 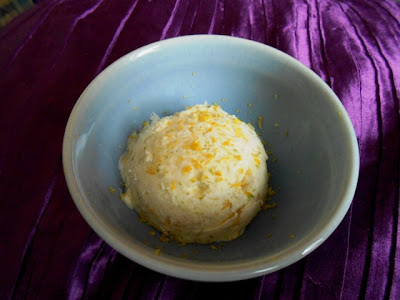