Saturday of the weekend had us planned to go for a traipse along the coast the other side of the Purbecks but a rather inclement start to the morning put paid to that. Grump - missed out on visiting my fave pub in the world for a pasty!!
Instead we settled on a visit to Wareham with a stroll along the river and a pub lunch before they headed back up t'North. I must confess that this decision was in no small way influenced by me having heard there was a market on the quay with a cheese stall and needing to stock up on Blue Vinney for myself and a couple of friends I have got hooked on the stuff, mwah ha ha haaa... :-p
So, first to the market and the cheese stall. Mostly the market (small) was the general selection of bric a brac / clothes / household bits / massive packs of crisps that you find at lots of markets but it's saving grace was that there was a small fresh fish van, a very good looking sprawling veg stall complete with yellow courgettes, romanesco caulis (the cool ones that look fractal), fresh lemongrass &c &c and the aforementioned cheese stall. Ahh - the cheese stall. It was a goldmine, I ended up spending over £12 and that was holding myself back!! (I'm very de 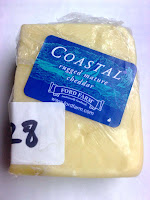 finitely not expecting to buy any more cheese this month!!) They had short dated Camembert at £1 each or 2 for £1.50 [2 - of course I got 2, did you really think otherwise?], the Dorset Blue Vinney I was actually there for, various Cheddars, Stilton, Smoked Cheddar et al. I came away with a very nice mature cheddar called Coastal, which although aged for 15 months isn't the kind that destroys your taste buds but remains still smooth and very, very good. I got a couple of chunks of Manchega at £2 a pop, one can go in the freezer. I have yet to try this but am hoping it's good. I got to like Manchega when I had it in Spain but then got some from the S'bury's deli counter last xmas and was bitterly disappointed at the flavourless plasticy product they'd somehow substituted for something actually edible. A big wedge of blue Vinney as it was being split 3 ways and the most intriguing for me, a blue cheese I've never come across called Fourme D'Ambert. Not knowing what it was like I opted for a small piece of this - MISTAKE!! It's like a blue brie or camembert is the best way I can describe it and super good. Deffo got to stock up on that next time I'm down that way! [On the subject of cheese, as we ever are, I may have to go to this - a cheese festival - what could be better!!] 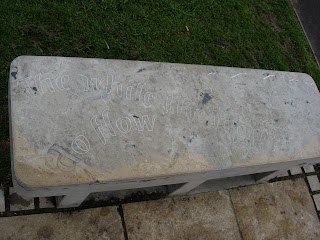 Laden with cheese we then decided to take a short stroll down the Wareham River (the Frome) to Redclyffe at the end and back. (Yep - shoulda done the shopping after, I know, I know.) New since the last time I was there are these stone benches carved with lines from a poem about rivers. I love this kind of functional item elevated to art by something relatively simple, and wholeheartedly encourage any local councils with a modicum of funding left over to follow suit. 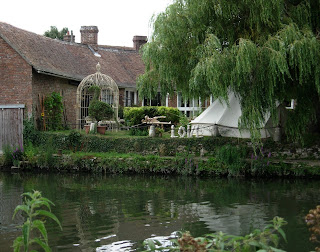 Spotted this intriguing garden across the river, equipped with teepee, birdcage type seating area and 'love' stones, it made me want to be able to have a poke around but this was the closest we got.
After a pleasant stroll - it had turned sunny by now as if to taunt my 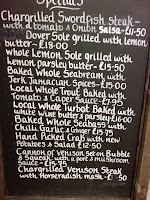 lack of a visit to the pasty pub - we decided on the Black Bear for lunch, based on this specials board outside. Although we were having a light lunch if the calibre of the specials board is anything to go by you can be pretty sure the rest of the menu should be alright. Everyone else plumped for the crab sandwiches, which was my original choice until I saw they had a pint of prawns on the menu - that's for me then!! Given the moniker 'activity food' by a sister this falls into that area of food wh 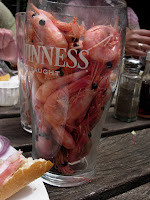 ere you really are going to have to get your hands dirty, like with moules, or whole crab etc. I love it!! I have to say these were excellent, plump, fresh as anything prawns with that slightest edge of sweetness that tells you just how fresh they are. My only quibble was the distinct lack of a finger bowl but hey, there was soap in the ladies so who's complaining. I'd recommend this characterful old boozer, there's fascinating old photos of the area on the walls in the main bar and they do very good Badger beers, the local beer to this part of Dorset.. Although the pub has a fairly narrow frontage it goes back and back through different rooms until you emerge into the courtyard garden at the back so there's plenty of space. They have a music festival in Wareham on the bank hol weekend and this is one of the venues so I may get to revisit it then. Here's hoping!
Posted by Ruthdigs at 18:03