Saturday brought the long anticipated (for me) home tie against the Quins. The last time we saw them down here was when they got relegated back in 2006 and proceeded to storm through the National 1 teams with the Chiefs being the only game they lost. One I was there to watch in my Quins shirt with my mother and big sis who travelled down for the game. Typical huh!
This season 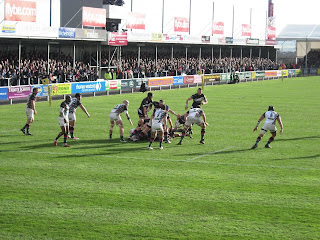 Chiefs played the Quins at their home ground the Stoop back in September, losing 40-13 on that occasion so we had a fair bit to prove this time round.
The game opened with Quins piling on the pressure early, the first 10 minutes were a little hairy it must be said. However - we held them off and Steenson [Steeno...] kicked our penalties one after another to notch up the points leaving us 12-3 up at half time. The second half saw the first; and as it turned out only tr 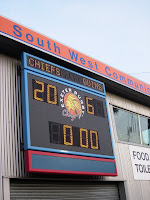 y of the game for Chiefs, along with a couple of other good go's for the line. Although we missed the conversion another penalty took us to a final score of 20 to the Quins' 6 - they having kicked a second penalty. The Quins did make a couple of good breaks for the line in the latter stages of the second half and they were nippy with it; I think their stamina was starting to tell at that point. We managed to keep them out though to emerge the victors. Considering Quins started the game 5th in the table to our 9th a 20-6 win isn't too shoddy at all.
Posted by Ruthdigs at 13:25