I've been thinking recently that I really should share a little more of the beauty of the place I live with the world. Exeter is a lovely city; small enough to still be friendly and fairly safe and dating back to pre-Roman times.  Extensively bombed in the second world war it was lucky enough to escape significant damage to the cathedral and some of the old buildings in the city centre remain there to this day.
Anyway - to start (not being that well planned) I have a couple of images of the river.  I walk along and then cross this river every day on my way to and from work so I see it in all moods; swollen and brown with the mud-laden run off from the moors after heavy storms, shallow and burbling gently in the summer sun when you can spot a little fish through it's lucid ripples, partly iced over in the harshest part of winter or just reflecting serenely the sky above on a still and calm evening.
This first image then (and I am well aware that you will have seen numerous images of the river before this if you are a regular visitor here) was from a couple of mornings ago when we had one of the (so far) very few frosty starts to the day this winter.  Although the frost laid heavy on every grass stalk the sun shone down and glinted such sparkles off the river it made me want to run to the hills for the day rather than go to work.  Or at least get down the allotment for some digging! 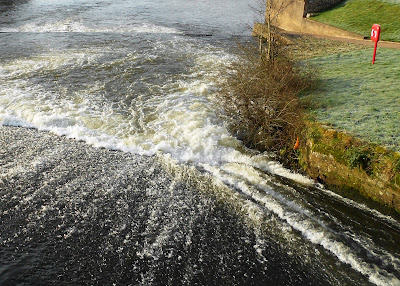 This second image is from my journey home last night when the river was in one of it's languid moods and showed me such a perfect reflection of the trees' bare branches above I had to capture the image; although these dimpsey lighting conditions aren't the best for photography.  I hope however, that the image manages to convey some of the serenity the river regularly gives me, and some of the beauty it is capable of. 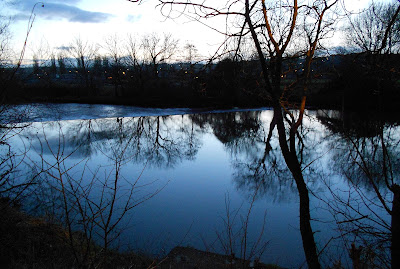