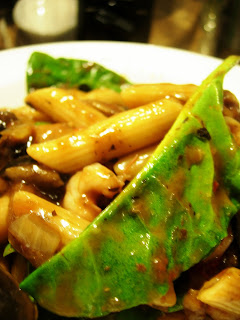 Speedy supper for when  it's late, you're tired and hungry and no - you really can't be bothered being virtuous and make a sauce from scratch.  Nowt wrong with that in my opinion.  'Arrabiata' means Angry - which is a reference to the chilli kick this sauce has.  You could use whatever sauce you have in the cupboard though and add your own chilli - or leave it out as you like.  It's quick and simple but still tasty - ideal.

Speedy prawn pasta
Stock cube - veg
EVOO
Pasta
1 onion
2-3 cloves garlic
Butter
Mushrooms
Salt
Jar arrabiata pasta sauce - ours was Aldi for about 75-80p-ish but not bad
2-3 tbsp tomato puree
Mushroom ketchup
Dried basil
Handful prawns
Handful spinach
Grated cheese - parmesan if you have it in, cheddar if you don't [or are forgetful of your recent parmesan purchasing activities like I was - dur!!]
Black Pepper

Cook the pasta in plenty of water seasoned with the stock cube and a splosh of oil to prevent sticking.  (I always put the kettle on for the water for things like pasta as it takes a lot less time than boiling the water on the hob from cold - especially if you have an electronic hob - I'm soooo glad I have gas!!)  Ensure to cook al dente as it'll be added to the sauce and heated again later.
Meanwhile heat a little butter and oil in a large wide saucepan.
Chop the onion and garlic and add to pan.  Cook gently to soften.
Chop the mushrooms - use however many you like / have in stock.  I used 5/6 I think.
Add to the pan with the onion and garlic, sprinkle a little salt and cook covered to keep the juices in, stirring occasionally until the mushrooms have sweated right down.
Add the pasta sauce.  As I mentioned ours was an Aldi effort - not bad but it did taste a little sweet to me so I added a good squirt of tomato puree - probably 2-3 tbsp and a splash of mushroom ketchup to counteract this and give the sauce some depth.
Add a decent pinch of basil - I was out of oregano otherwise I'd have added this too.  Any Italian herbs you have will do.
Stir thoroughly then add the pasta and stir well again to get it all covered in sauce.  We had S'bury's basics penne - the grooves hold the sauce nicely and it's v. frugal at a mere 17p for 500g dried product - that's even better than Aldi or Lidl can manage!
Ensure it's heated through thoroughly then add your prawns.  I buy the S'bury's basics frozen 300g bags at £2 a go.  As long as you don't overcook them they're fine, just smaller.  (Hence if overcooked they'll a) vanish and b) turn hard - yeurgh!)  It means that for that price I don't mind adding a large handful - I love prawns!!  [I also know myself and after defrosting while they're sat on the side waiting to go into the pan we seem to magically lose half of them - very odd it is...]
Cook only enough to just heat them *through then add the spinach and turn it into the pasta and sauce, cover the pan and remove from the heat.  Let stand for a bare minute to wilt the spinach.
Serve and sprinkle with grated cheese and a good few twists of black pepper on top.  Voilà!!  Shouldn't have taken too long so now feel free to go collapse and chillax.
*Obviously using your common sense where seafood and the heating / cooking thereof is concerned.  I accept nowt &c &c...
If you don't have spinach use whatever you have; adding at the right point so it gets cooked.  EG - if it's calabrese I'd add for the last 2 mins of the pasta cooking time and thereafter drain it etc all together.  Treat this as a vague guideline suggestion type iof thing and ensure you have value pasta and a jar of sauce in the cupboard for those times and you're away.
Posted by Ruthdigs at 18:42