Seaside bimble with a forage thrown in 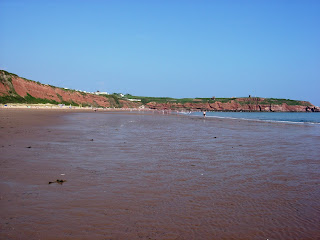 Well in contrast with the excess of the food festy we took a little bimble along the coast the previous week from Exmouth round to Sandy Bay and picked up some rather more frugal foodie goodies.  The weather was glorious, the sea - er - bracing!  [Mighty nippy.]  All in all it was a thoroughly restorative day for someone cooped up with hurty eyes for too long.  Found various shells, some dog whelks and one full size whelk which we stashed in the cool under a rock and failed to find again on the way back!  [Darn those pesky rocks all looking the same!]  I loved the colour of this little crab shell though. 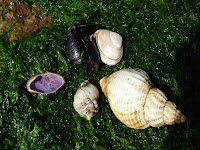 We had taken along the River Cottage 'Edible Seashore' guide and having carefully perused the pages on mussels decided we'd collect a few of decent size to try.  I must say it's a tiny bit thrilling to be doing so when you consider mussels in a pub or restaurant are perceived more as a luxery item with price tag to match and here we were getting them for nuppence - the best price!  Do be aware though that you will need a 'sacrificial knife' once you get home to deal with them.  No - I don't mean for any dodgy offerings to some formless deity of your choice but a knife you don't mind getting very blunted for the purposes of pulling off the *beards and scraping off any barnacles.  The knife I snapped the tip off of getting into oysters after last years food fest does me nicely!  Having got a plastic bag from the local plastic tat / buckets 'n' spades type shop [we were woefully underprepared apart from the book having both forgotten to pick up anything to put any foraged goodies into] we collected a decent handful of mussels and some Sugar Kelp seaweed.  According to the book of words it's good flash deep fried as a kelp crisp - you can tell the difference from regular kelp (which can also be treated this way) as it has wavy edges and a bumpy look whereas regular kelp is flat. 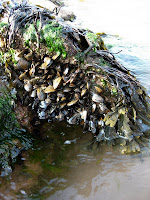 Now - mussels can contain grit as they're filter feeders.  (This is why it's very important indeed you only get them from clean water areas and at certain times of the year which I'm not going to tell you thereby forcing you to look it up yourself.  I take no responsibility for any wild food misadventures, only for my own!)  Containing grit means you need to 'purge' them - soak them in aerated salt water for several hours with or without oatmeal (apparently it can speed the process) before cooking.  If you're going to cook them in a sauce like a classic moules marinière this is important as grit in the dish is a real killer to the enjoyment of great food.  We however; due to time constraints amongst other factors, opted to cook them in plain water letting any grit fall into the pan then shelled them and used them in a fish pie.  Chap and I did taste one each 'straight' as it were and they were delicious.  Sweetish as really fresh prawns can be, a delight to eat knowing we'd scooped them from the waves mere hours before.  We'll definitely be repeating this experience though we'll have to wait now until after the summer as this is when they spawn so you shouldn't pick them.  Apparently they are biggest in Autumn after their summer feeding and before they lose weight over winter so it'll be a treat I'm looking forward to already.
*I learnt from the book that the 'beards' or 'abyssal threads' are made from iron the mussel extracts from the seawater and used to be woven into cloth called 'mussel silk' which such luminaries as Caeser and Ghengis Khan used to wear!  Cool huh?  [In case you hadn't picked up on it yet I am a lover of the odd random and/or esoteric fact or three.]
Oh and the kelp?  Er...we kinda forgot about it so the taste of Sugar Kelp crisps remains to yet delight our tastebuds, or not as it may be.  (We had to throw the seaweed away.)  We will gather some again another time though.  I know - my bad.  :-(  Even free food wastage annoys me!  :-D
Posted by Ruthdigs at 18:15