Ideal for using up odds and sods of fish in the freezer or buy some pie mix from your local fishmonger (undoubtedly better qulity and value than the stupormarkets - unless it's on the CFC of course), this is a doddle to make, goes a long way, can be a light summery dish or a comforting one for those chillier evenings and best of all is topped with cheesy crunchy breadcrumbs.  No 6 inch layer of mash followed by a game of hunt the prawn here.  This is a FISH pie.  Made of FISH.  It is not an excercise in rebranding a mashed potato pie as it's piscine equivalent in the hope of sqeezing some more pennies out of the poor old public.  You know who I'm talking about here don't you crappy pubs/Youngs &c?  (Did you know there's a whole 18% fish in a Youngs Admirals Pie.  18%?  That's disgusting.  And I had to find that out from S'burys site - they don't tell you on their own.  It's 45% potato - nearly half.  Words fail me.  [Though probably not for long.])  My pie has no potato in it.  Again - NO POTATO.  Don't get me wrong.  I love the spud but there's a place for it and if it's near this dish it's most definitely on the side not in it.  Here the fish is the star.  Even, as previously mentioned, when it's the cheap off cuts and a handful of value prawns.  So - rant over - this is what you do.  Amounts are a little hazy as it depends how big a pie you're making - mine was with a (whisper it) supermarket pie mix from the CFC for 70p with some mussels picked from Exmouth thrown in. 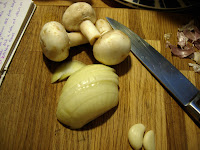 Put EVOO and butter in pan to heat up.
Chop onion, garlic and mushrooms and fry gently to soften.
After a few mins add a splosh of white wine and raise the heat to boil off the alcohol and reduce the liquid a bit.  Or don't bother with the wine - we had an open bottle to hand so I popped some in.
Meanwhile make the sauce by melting 1oz butter in the microwave.
Whisk the flour in - 2 rounded tablespoons is a good measure for 2 oz.
Add a little milk and whisk in to get rid of the lumps then add the rest of the milk and season with S+P and a pinch of tarragon.
Microwave and whisk periodically until thickened and the flour is cooked out.
Lay the raw fish out in the base of your casserole dish and put in the oven to start off. 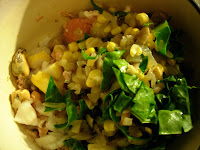 Mix the onion, garlic and mushrooms into the white sauce and add your veg - peas or whatever you wish.
Pour the sauce over the fish.
Mix the breadcrumbs and grated cheese and sprinkle evenly over the top.

Cook covered in oven for 30 mins-ish dependent on size of pie - until top golden and cheese melted.  Check after 15 mins.  Even with the lid on the crumbs should crisp up nicely.

And that's all there is to it - a fish packed tasty, healthy pie with nary a scrap of watery mash in sight.  You can add your choice of fish - whether as a mix or spoil yourself with just your favourite.  In this way it can be as frugal as you can make it or rather more of a luxury treat for yourself.
Posted by Ruthdigs at 16:14