More loveliness and adventures in food

Realised I hadn't shown my beautiful olive bowl set to the wider world yet. I originally bought one of these for my parents about 5 or 6 years ago for xmas and have wanted

my own ever since. Theirs is a cobalt blue though; which is actually the colour I'd normally go for but this one was so gorgeous it just edged the lead. Made by these people, and I'm seriously considering asking if they'd do me a mug I love the colours and glaze effects so much. It was my first buy of the festival and cost £10 which for a handmade delight like this I think is pretty good. I know I paid more than that for my parents one all those years back from a local gallery. Always better to buy direct from the artisan if you can.
In addition to my cave aged cheese previously mentioned I also got smoked cheddar from Quickes Traditional - they of the monster cheese in the post below. They're based just outside Exeter so a very local product. I like the taste of smoked cheese but so often the cheese is that slightly 'plasticy' type (like Edam) and I'm not a big fan of it. Next up I got some Cornish Blue cheese - one piece for me and another two at the request of friends. This company had a new product this year which was pate made with their blue cheese and either pear and walnut or fig. I went for the pear and walnut option, after tasting some of both of course. :-)

The other thing I got was a couple of oysters. I've never had them before and although there was a company at the festival last year shucking them and selling them to eat right there I didn't really want to do it with an audience in case I really hated the thing and felt like I had to spit it out or something terrible like that. I wanted to buy one, take it home, work 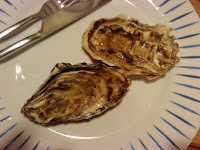 out how to get in the damn thing and eat it in the privacy of my own home. Anyway, I ended up with 2 by accident because the lady (wife of the fishmonger) wasn't sure of the cost and when I went back at the end to pick up my one oyster (they kept your purchases on ice for you) she'd overcharged me so they had given me 2. Hmm - wasn't sure what'd happen if I hated it though.
Well - if you've never opened your own oyster they are a git to get into, they really are. I had checked online of the best way to do it, wrapped a tea towel round my hand and carefully tried to gain ingress. One broken off tip of knife later... However, I managed in the end and ate one straight and the other with a splash of lemon. Do you know what? I'm still not sure about them. I just can't decide if I like them or not. I think I had quite massive preconceptions of the texture before I tried them and this had coloured my judgement (negatively) to such an extent that to make an objective assessment eludes me. I think I may have to try again, I'd like to grill one and try it cooked as well.
The last lovely thing I had at the festival (along with a couple of pints) was a rather fine 'Mushroom & spinach with hazelnuts & white truffle oil' pie from the locally based Tom's Pies. It was mightily good I have to tell you - should you be in a position to lay your hands on these it's a 'double thumber'* from me.
Well, you may have gathered I'm quite fond of cheese, think I'm well stocked for a fair while now though!
* 'Double thumber' - a phrase my friend invented meaning a double thumbs up. I like it. :-D
Posted by Ruthdigs at 17:49