A yummy root veg soup I made last night, with a smidgen of blue cheese added at the end. This helped cut through the predominantly sweeter flavours of the veg I used; and needed using up as it had been - er - aging (forgotten about) in the fridge since xmas. Oops! This meant though that the small amount I had was nicely flavoursome (fearsome?!) and up to the job.
Root veg soup with blue cheese 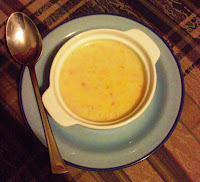 1.5pt veg stock
Half Swede
1 Parsnip
3 Carrots
Ground white pepper
1tsp Garlic granules
1tsp Dried mixed herbs
0.5pt milk
1oz-ish blue cheese - to taste
Ground black pepper
1oz-ish butter
Put veg stock in big pot and bring to the boil.
Chop the swede into chunks and place in the boiling veg stock. Add garlic granules and mixed herbs and boil for 10 minutes.
Meanwhile chop parsnip and carrots. Add to pot and boil for a further 10 mins / until all veg soft.
Go at it with a masher / stick blender / FP until your preferred consistency / your arm feels like it's gonna fall off from all the manual mashing.
Add milk and gently warm through. Chop blue cheese and stir/melt in and season with black pepper to taste. Whisk the butter in.
Makes a substantial soup, rich with the flavours of the veg. I'd recommend adding the cheese a little at a time as you don't want to drown out the veg flavours but want the cut across the sweetness. 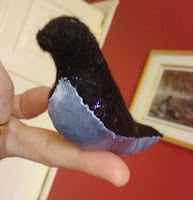 My first effort at one of these fabric birds. My idea for the peg on the bottom didn't really work, the weight of the bird meant it just ended up hanging drunkenly from the peg on the branch. Also the little pegs I had were however bigger than I remembered so would be too intrusive to my mind. I have smaller wooden pegs but then they would be too small to grip the branch. I think an alternative solution is needed. On the site where I originally saw these they mentioned they affixed them by sewing them on (in the comments) but I want a less permanent solution that preferably doesn't trash the bird every time you want to change it's position. I'll have to ponder that one - plenty of time for next year. :-)
And yes - I need funkier fabric and to not overstuff the tail. Hey - life's a learning curve!
Posted by Ruthdigs at 13:51