I can't believe I forgot to tell you about my seeds I got at the show!! Only 2 packs from these people who specialise in organic and unusual / heirloom varieties. One was Pak Choi as I grew this last year but hadn't got any new seeds for this year yet. The other is the exciting one though - Tree Spinach!! How great does that sound already? I don't have a lot of info on the pack but it can grow up to 2 metres and that was enough for a seedaholic like me to snatch it up with cries of wonderment. (I think I rather startled some of the surrounding people with my enthusiasm actually!) But 2 metres tall spinach? I mean - how cool is that gonna look. 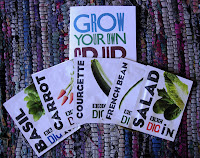 Still on the subject of seeds my free packs from the BBC's Dig In campaign arrived yesterday. Having just checked the site it says due to the response you can longer sign up online to receive them but can pick them up at their roadshow events. You get Basil, Carrot, Courgette, French Bean and Mixed Salad with a growing booklet. Not bad for free and considering the cost of the licence fee...
Any I don't use will be donated to a friend whose work place is starting a veg garden so they won't go to waste; and seeds last a few years in most cases anyway. More to get planted at the weekend!
Posted by Ruthdigs at 11:01