Been playing with my old camera - or really I should say one of my old cameras as I have somewhat of a surfeit of them it seems. 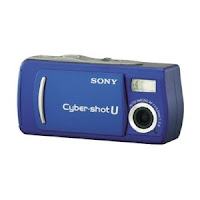 This is a Sony DSC-U20.  This one I really did get for the looks I'm afraid - totally form over function as even when it came out back in December ’02 the max resolution of 2 mega pixels was pretty low.  Admittedly I didn’t get it then at full price but at least 2/3 years later as a refurbished one from my then employer.  As soon as I saw its brushed royal blue metal body though I coveted it and if only the image quality could have lived up to those looks I’d have been more than happy.  I quickly realised however, that in anything less than good sunlight it wasn't that great so it got fairly minimal use over the years.
Back to now and what with being temporarily camera-less [or as camera-less as you can get when there’re at least 10+ in the house that is] this was one that I’d pulled out to look over.  Setting aside the low pixel count for a mo it actually had an ok spec for a fun young-demographic-base unit.  Here’s a pic taken with the solarise feature that’s now fairly ubiquitous on all phones and digi-cameras but I honestly don’t think I ever used it on this camera before. 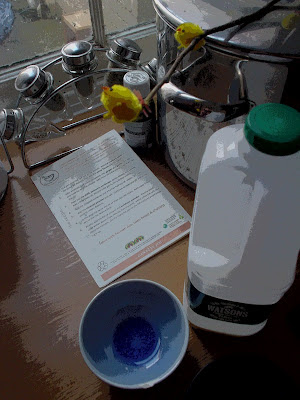 Anyway – I am happy as I have a new camera swapped yesterday for my poorly one.  It’s nigh on exactly the same as the previous Nikon – it’s the S3200 with 2 million pixels more and a 6x optical zoom instead of the 5x of the S3100.  So I'm back in business again!!  It was typical that after I got the replacement camera the first thing I did on getting home was manage to stumble across the old card reader I needed to get the pics off the Sony with.  *sigh*  So expect some images of the river exe in full flood mode over the next few days as it's been raining hard here for what feels like a month now!