A pause to relax; and a few randoms

Well despite promises to the contrary I evidently still haven't got a full and proper post up here yet - Doh!  Hey ho - no time to hark on about that now or this post may go the same way! 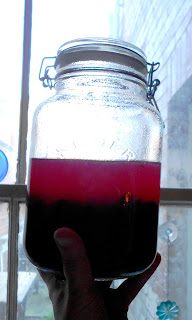 Last weekend we made an effort to empty the freezer somewhat which meant using the last of the sloes to make sloe gin with.  If you've never made this it really is a piece of p*ss and the reward is low in cost but deffo super high on the tastiness factor so when autumn hits get out there and see if you can track down a local blackthorn bush or two.
A brief synopsis is - 1 bottle gin to 1lb / 500g sloes - freeze then defrost on a tray and run the rough side of a grater over them to break the skins.  Put both items into a sterilized le parfait style 1.5l size jar and add sugar if so desired.  I added 100g.
*Top tip to take notice of - the sugar has no effect of any kind in a fermentation type way.  The gin is already alcohol - you are merely adding flavour with the sloes and the sugar is just there because sloes are so tart and sour on their own.  Lots of sloe gin recipes say to add loads of sugar - up to the same weight as the sloes!!!  How do you know at that point that all that sugar is needed?  Each years fruit will vary slightly in terms of taste, juiciness and tartness but once you've added all that sugar you can't take it back out.  You can leave the sugar out altogether and just add at a later date to taste once the gin has finished 'steeping' or you can add a little now; which is what I do, then you have the option to add more later if needed.  * Didactic style mini-rant over.
Shake the jar like your very best 'dad' dancing style personal disco just rolled into town and stick it in a dark cupboard.  Shake again at the very least once a week for another 2-3 months - the more shakin' goin' on the more taste you'll get from your sloes.  Strain off and taste, taste again then taste again.  Do the sugar thang and enjoy.  :-)

Over the weekend - back when it was still sunny (!) we also took a minute out from the Sunday food shopping run to sit in the sun with a pint, a bag of Burts crisps and these lovely olives - I appreciate the sentiment on the sweet little pot they came in and olives are fairly good for you I believe.  [Click on the pic to enlarge.]

Lastly; on Monday I popped into the local Arts Centre - the Phoenix, to purchase tickets for myself, ma and big sis for the upcoming Exeter Festival of South-West Food and Drink.  (Hereafter referred to as 'Exeter food fest' as the official title isn't particularly snappy and takes waaaay too long to type out.)  Whilst I was there I took a brief wander round their current exhibition 'The Perfect Nude'.  There were some very interesting pieces here in many different styles and mediums although they are all 'paintings' in some form although there are 3D pieces amongst the works.  The exhibition runs until May 12th if you want to see it.  I found it thought provoking, finding some of the pieces a little uncomfotable in their delivery whilst others really drew me in..  My favourite 2 pieces were 'Blue Nude' by Laura White.  I didn't get a shot of this but there's one on their site I'm borrowing for here - hopefully no-one minds as I'm bigging the exhibition up!  The other is 'better out than in' by Mindy Lee which I did take this 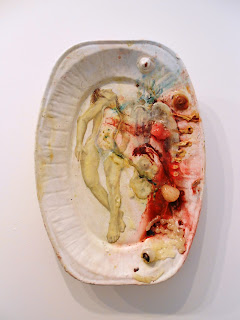 shot of.  I guess some people may find this a little macabre or 'gross' but I love it - I think it's fascinating and I also really like the delivery - the immediacy the 3d aspects bring plus the glossy 'wet' look of the eviscerated innards.  This exhibition is the brainchild of two artists and curators; Dan Coombs and Phillip Allen and is composed of works by invited artists who were given the subject matter by the pair.  They say their "interest lies in the idea of imposing a subject onto the participating artist, to see what happens when the artist no longer bears responsibilty for the subject."  There's some insightful comments on the naked vs the nude on the sheet that was given out at the gallery but what I'm quite interested in is that the 2 artist/curators are themselves giving a talk on the background and themes of the exhibition at the Phoenix on the 21st April.  Even better it's free so I might just pop along to that.
Until next time.  :-)
Posted by Ruthdigs at 11:45