After a slack section in my blogging recently I am returning with - what's this?  A meat recipe??!!  Yes - sorry m'dears but I figured it was a post I could hopefully write up fairly quickly as there's not masses to the recipe.
I get oodles of emails along the lines of 'visit our sparkly website and buy our shizzle' as I am in the habit of signing up for all the freebies I can find left, right and centre which invariably means giving them an email address in return.  Still - if you want free stuff (and after all - there's enough free providers of email addys out there that you can set one up specifically for this kind of sign up) I don't see the issue.  Sometimes you even get something that interests you pop into your in-box.  Hence this recipe which came from the Chinese food company Lee Kum Kee as part of their suggestions for mother's day.  It's easy, the ingredients aren't massively expensive; the chicken forms most of it but do get a decent welfare one and make sure you get your soy sauce from a Chinese supermarket - this recipe does us half a litre of the stuff!!  Most importantly for the beloved meat eater in your life it is; according to the Chap, most yum indeed.  [I'm fairly sure as a burly builder type he didn't utter those actual words - but don't you wish he had?!  That was certainly the sentiment he expressed anyway.]
Here goes then:

Chinese Roast Chicken with Honey and Oyster sauce  [I've linked the original recipe here but as it's listed under the mother's day options I'm unsure how long it'll stay on their site so I'm putting it here too - I figure me mentioning the company a few times over the course of this post is fair exchange for promoting their recipe don't you?  Especially as said recipe was on the web for purposes of monetary gain in the first place.]
1 chicken - approx 1.5 kg in weight
500ml soy sauce
2 fat cloves garlic - minced
1.5l water

The more observant of you may have noticed that the last 2 ingredients are in a diff colour - they are the 'glazing' ingredients.  The rest are the 'seasoning mix'  - boiling ingredients. 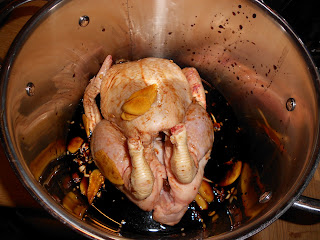 Put all the boiling ingredients (bar the chicken) in a pan large enough to hold them all and the chicken and bring to the boil.  Carefully manoeuvre your chicken into the mix [I declined to just 'drop' it in as the recipe said - fearing a soy sauce splash back incident!], cover and reduce the heat to a simmer.  Simmer for 30 minutes. 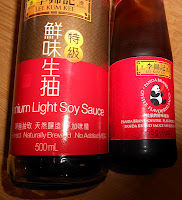 Put oven on to heat at 160.  Mix together the glaze ingredients of oyster sauce and honey.  As it turned out both the soy sauce I already had and the oyster sauce I purchased for this recipe from my local Chinese supermarket were the Lee Kum Kee people's products but any would do I'm sure.  The honey I used was just S'burys basics stuff - perfectly good enough for cooking and baking with I find.
Carefully remove your chicken from the water - at this point I realised that perhaps you're supposed to leave the damn thing trussed up as it comes in the packaging rather than carefully snipping through it's ties before boiling the thing as I did.  Legs and wings were flopping about everywhere I tell you!*
Lay in a baking tray and pour the glaze over ensuring evenly covered as much as possible.  It does all slide off into the tray as it warms though.  The recipe suggested uing a brush here - I didn't bother as I found spooning it over and spreading it with the back of the spoon was adequate without having to thoroughly gunge up my pastry brush. 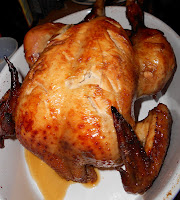 Cook for 30 - 45 mins (the recipe says) - I did 45 mins basting with the glaze every 15 mins.  Check the chicken is cooked through properly usng the old 'juices run clear' technique.
Serve.  Apparently this was authentically like the 'Chinese' chicken bits you can get pre-done in the shops and was thoroughly enjoyed by the Chap.  It's a low prep recipe so easy to do with little time having to be spent watching over it.
* [This bit did make me a bit uncomfortable - the whole 'recognisable shape' thing I guess that did a good job at eroding the distancing I use when cooking meat for The Chap.  It was the way the limbs moved - far too easy to see the form of the hen it once was bounding about a yard somewhere.]
Posted by Ruthdigs at 12:12