As promised, some more info on the wild food weekend we had. On the foraging walk we learnt many different plants as well as some interesting and useful facts on each one, and prep guidance. I'll post some pics here but bear in mind this is a reference for me as much as anything else. In the words of Robin from Eat Weeds - 'never ever put anything in your mouth unless you're at least 110% sure it's edible. For some plants that have a poisonous lookalike this should be more like 500%.' Therefore I take no responsibility etc... 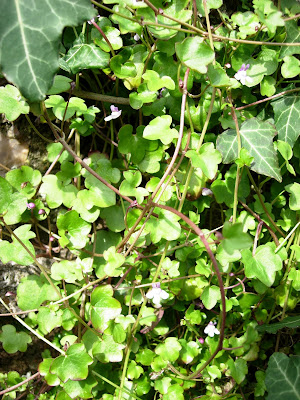 Ivy Leaf Toadflax - The daylight will make the underside of the leaves go red which in turn makes for a more bitter taste. Better if growing in shade and in the Autumn. 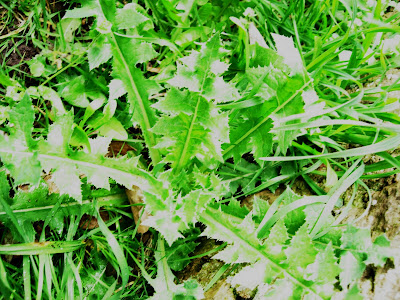 Smooth Sour Thistle - Can eat the leaves raw or cooked. 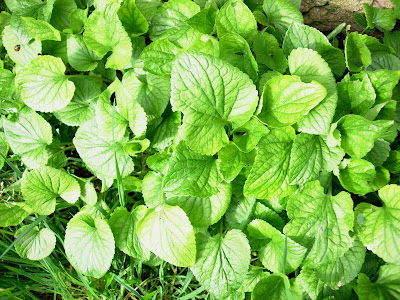 Violet Leaf - Bland. What was used as a 'pottage' plant in the past when the women would start the stew on the fire in the morning, go out in the fields for the day and gather these edible greens on the way home and add them to the pot. Can make a pleasantly flavoured sugar with the flowers.
Daisy - some people can react badly to this. Use just the leaves and cook them - saute. Don't eat raw! I figured I / you don't need telling what a daisy looks like so no pic.
Primrose - similarly no pic though I was later horrified to discover the Chap had no idea what a primrose was. I know he's Londoner originally but that really is ridiculous!! Can use the flowers in a salad or can try drying the leaves and flowers.
Lesser Celendine - As mentioned leaves only. Must be cooked - saute or use in risotto. Pic in last post. 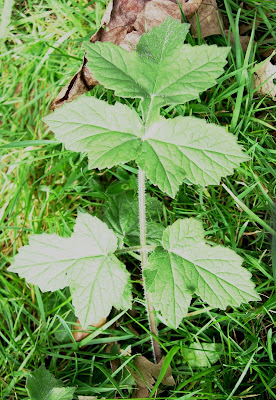 Hogweed - Regular not Giant one. Member of the umbellifer family (like carrots) which means there's a lot of options out there that look the same but which won't do us any good at all. One of the 'you must be 500% sure what it is' brigade. [The edible members of the family tend to be hairy - but that doesn't mean they all definitely are or that all the hairy ones are edible. Carrots aren't for a start. You have been warned!]
The sap can give some people a skin reaction; especially in conjunction with the sun, so gather with gloves. Eat the young shoots and leaves in March - April. Can be made into soup, fermented (think Kimchee style) or sauteed with butter until caramelised. The root can also be eaten but must be cooked. Apparently the seeds taste of Cardamon.

That will have to be it for this post - wow - I haven't even finished all the plants we saw let alone the eating of them, the coastal forage after or the river bank one on the sunday and it's nearly another weekend already! I'd better get my typing fingers out eh? I'm afraid it's far too sunny though to even vaguely think of being late at work and I have what are rapidly turning into mutant broad bean plants desperate to get into the allotment. Thus I am forced [you can tell it's taking a lot of forcing eh?] to bid you adieu. :-)
I have thoroughly given up on this stupid spacing Blogger seems to favour whenever I try and post multiple pics. My apologies for it - know I have tried my best m'dears.
Posted by Ruthdigs at 14:23