Bet you're going 'ick' right now eh? Here in Exeter we've got a fair few Chinese, Oriental, Indian and general World Food shops. Having booked off a half day last Wednesday for the abortive IT system switch over (now delayed for a week) and the Chap having been rained off we spent a greater part of the afternoon poking around several of these shops. It's fascinating and often much better value than buying these ingredients in English stupormarkets. Even if you don't fancy some of the more exotic offerings they're especially good for big packs of noodles or rice - works out a much more frugal way of buying these basics as well as things like soy sauce. We ended up with potato based noodles, dried shrimp, shrimp paste, dried squid, water chestn 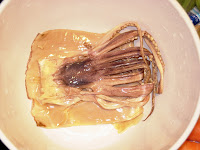 uts and some 'pickled' veg. [I think the 'pickled' bit here is something of a misnomer, at least sometimes. These packets come in a wide range of veg combos with chilli etc added.] Then we looked up what to actually do with the squid! :-D We decided to make a general stir fry with veg, noodles and the squid. This is how it went:


1 dried squid - soaked in water overnight, water changed then soaked for the day*


Pack pickled veg - ours was a kelp and bamboo shoots mix


Sesame oil (if you have it) 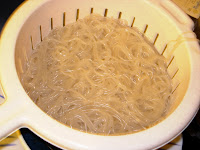 These noodles take 8-10 mins boiling according to the packet so we boiled them for a little under that, taking into account that they will be added to the wok again later; drained them and put them on one side. Note here - they stuck together evilly after draining - apparently I should have added a little sesame oil during cooking to prevent this much like you would oil to pasta. [I don't know the proper name for these but check the picture if you want to find them - they end up looking a bit like glass noodles once cooked but don't in the pack.]


Drain your soaked squid and rinse well under running water to ensure no dirt could be left on. It was still fairly tough feeling so we decided to chop it into smallish strips - about 0.5 - 1cm wide. I just used the kitchen scissors, think this was far easier than using a knife would have been.


Heat the veg oil with a little sesame oil for flavouring.


Chop onion and add. Chop rest of the veg and add, stir frying.


Add approx 2 tbsp fish sauce [sorry for the approximate measures here but chap did this bit and didn't measure like I would!] and less of soy - maybe 1tbsp-ish.


Mix Tom Yum paste into a little hot water (if you have sauce instead of paste you may not need to do this) and add to the wok. Continue cooking for a short time until veg are nearly cooked to your liking [bear in mind they really should crunch in a stir fry - at least a little bit] then add the noodles and stir to ensure they are evenly coated in sauce and bits.


Serve. [We're 'not very good at quantities' type of people so this made enough to easily feed 4, or 2 and 2 lunches for the next day!]

mm - well I'm glad we tried this but simple answer - we're not going to bother with dried squid again. [Any takers for the second one in the pack?] Small pieces were ok but the texture was rubbery, reminiscent of the limpets we had before I blitzed them, only not as nice! Any pieces that were a little larger took a lot of chewing - they did not have a nice mouth feel to me and made me feel slightly icky. Not recommended! that said the general flavours in the sauce we came up with here were nice - just leave out the dried squid!!


*Dried squid smells, no 2 ways about it. Expect your kitten friend to be climbing the cupboard next to you as you prep the squid for this dish. Frankly he may well end up getting the second one, suitably soaked and chopped into treat size portions. Bleargh.


:-( I just can't seem to get the stupid spacing and formatting of this post corrected - down to having manually retyped the whole post. Pah - enough!