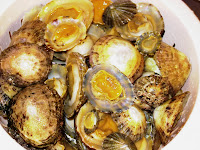 Limpets - hmm. The books seem divided on these with Hugh F-W enthusiastic about them; although admitting to their rubbery qualities, and John Wright of Edible Seashore rather more disparaging - describing eating them as like eating pencil erasers dipped in fish paste!! Not exactly encouraging but I didn't share that section with the boys when we were collecting the things. ;-D
We'd placed them in salted water [35g sea salt to 1l water] until we were ready to use them in an effort to purge them - ie rid them of the grit in their stomaches.
Anyway, having seen a few too many references to rubberyness we decided that a lo 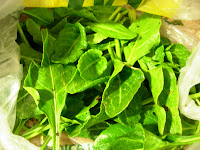 ng cooking time would be the way to go so we'd use the slow cooker for this stew. It was an experiment really but I was hopeful they'd prove palatable being an easy forage that's not exactly hard to find. I also added some Sea Beet we'd foraged from the same stretch of beach - this is a common seashore plant that we'd never tried before that John Wright was rather more complimentary about than the limpets; likening it to a superior kind of spinach as it doesn't lose it's shape on cooking as spinach does. This is how it went then.

Slow cooker Limpet stew
3 small onions
2 cloves garlic
2tbsp EVOO
0.25 pint white wine
1 tin chopped tomatoes - drain but retain juice
1tsp smoked paprika
Limpets - we had 3.25lb of them in their shells
0.75 pint fish / veg stock
2-3 potatoes
3 white fish fillets chopped into chunks
Sea beet - 3 handfuls
Frozen prawns - 1 handful
Frozen cockles - a handful
Lemon juice
Put EVOO in pan to heat. Finely chop onion and garlic and fry off to soften.
Place wine and drained tomatoes in the SC on high - retain the juices from the toms though.
Add smoked paprika to the frying pan with the onions and garlic and cook for a couple more minutes, stirring well then add the lot to the SC.
Scrub the limpets and add to the SC in their shells. Switch to 'low' setting 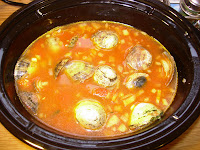 and add fish stock to cover - I used 0.75 pint made from a cube. Add the tom juice at this point if more liquid is necessary to nearly cover all those shells.
After 8 hours the limpets will fall from their shells with ease; pick the shells out being careful not to burn fingers!
Add the potatoes, chopped into smallish dice and leave for another 2 hours to cook through.
At end of this time try the limpets and discover they're still disappointingly rubbery in texture so decide to try Mr Wright's tip of blending the things.
Blend mainly the limpets and chunks of potato with a little of the liquid. Be startled at the - er - 'interesting' shade of green it goes. [At this point it's fair to say I was getting a little more perturbed as to whether this increasingly long-winded process was actually going to produce something fit to eat. Looks appetising deosn't it?!] Return to SC where the sauce has been cooking away for another half hour.
Add the 3 white fish fillets (I buy the value packs of frozen ones in the stupormarket) to the SC and leave for a further half an hour.
Strip the stems out of the sea beet - they are a remarkably obliging plant in that these tear out very easily. Add them to the SC. Taste for seasoning - I added salt.
Add handful of defrosted prawns and cockles to the SC and stir in. Leave until fully heated through at least.
Immediately prior to serving add a splosh of lemon juice to taste. 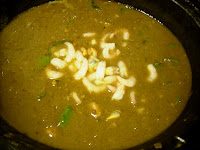 Hmm - we all liked this to start with - although liquidizing the whole limpets (rubbery foot and dark stomach section) had left a bit of grit in - solved by just serving from the top of the pot. However after a while the taste becomes a bit much. Having tried this at various points in it's creation I think that next time the best use for limpets would be to simmer them in stock / toms; whatever you want, to give a basis for a bouillabaisse type soup or stew then discard the limpets themselves. The 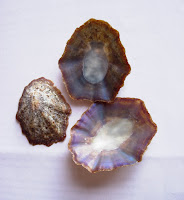 taste of the liquid before blending the limpets into it was better I think.
Anyway - you have to try these things and now we know. Try yourself and make up your own minds though - it may be a taste/texture combo you love but for me - it just didn't live up to the ones I'd had in garlic butter in Madeira a couple of years ago. As you can see from the shells though they're not the same variety as our native type. Perhaps the shore is the best place for me to leave those in future. :-)
Posted by Ruthdigs at 10:33