There's been 2 home games over the last couple of weekends for the Chiefs with one loss and one win. First up was a local Westcountry derby V Bath on the 26th Feb. The start time for this had been pushed back to 8pm for the telly. This meant that we could watch the 6 nations games first [including watching England cream France] but meant we were all, er, rather tired by the end. [As attested to by fuzzy nature of the pic here!] Sadly we lost 9-12 in a penalties only game which saw our normally reliable Steenson miss a couple in t 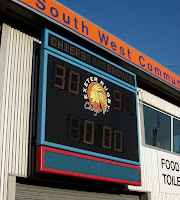 he high winds. It was another packed crowd though for this sell out game; and according to rumour we statistically can't go down now despite stubbornly sticking at position 9 in the table.
Rather more happily our last game on March 6th was a 30-9 win against Northampton Saints including 3 tries scored by us in the glorious Devon sunshine. We narrowly missed out on a bonus point but were happy to add to the Saints losing run. (6th game in a row now.) We're still 9th in the table, but as long as it's the Premiership table we're in I don't think we mind too much.
Posted by Ruthdigs at 13:30