Week of half term

Hell, it's a long time since half term meant owt to me but this one brought the arival of the Chap's 14 year old son to spend the week. As previously mentioned I was a little trepidatious about this having a) never met him before and b) no experience with kids as I have none nor do my big sis's. Eek - what do you do with them for a week??!
Well...technically it wasn't a whole week. Son arrived on Monday arvo to the Chap's peres where we all had dinner and spent the evening sat around nattering. We then retired upstairs and had a poke bout on t'internet for options for the next day - we were in the son's hands!
Tuesday brought the decision of a trip to Paignton Zoo - or 'Environmental Park' as it appears to have rebranded itself on the signs at least if not their website. I'm a bit mixed on zoos - it's not where any animal should be out of it's natural habitat but I'm well aware there're some species we'd be pretty much without if it wasn't for them.
Paignton is an impressively large site split into areas roughly equating to habitat type. There's a lot of impressive bits to it and it will easily fill an entire day to look around. A lot of it was well done, informative and interesting. The whole place obviously cares about it's charges and about educating it's audience about them and the consequences of our actions upon the world. Sadly this doesn't alter the fact that some creatures just don't seem to adapt so well to captivity. The Echidna in particular seemed intent on tracing it's path round the edge of it's enclosure; although to be fair this may be regular behaviour for them. For the pub-quiz-factoid lovers amongst you the Echidna is one of only 2 mammal types on the planet that lay eggs, the other being the duck-billed platypus; an animal made from the bin-ends if ever I saw one! The Echidna looks a little like a long nosed, extra-long spined hedgehog/porcupine sort of thing. The Cheetah also had a path worn round the edge of it's enclosure; although when we saw it it was lazing on top of it's shelter eyeing a fat wood pigeon pecking amongst the trees not far off. The rest of the big cats we missed out on only getting to the park for the afternoon. :-(
The ape house also made me sad - as well as marvelling at the sheer size of a gorilla. Most animals you get an idea of their size off the tv but gorillas in the flesh - they really are huge. And gentle and therefore oh so sad, for me at least. The rest of the park was interesting and informative though. Bear in mind my personal responses to the place are no reflection on it and the running of it!
A few pictures then - a lot of the creatures were behind glass so you're spared masses of them! 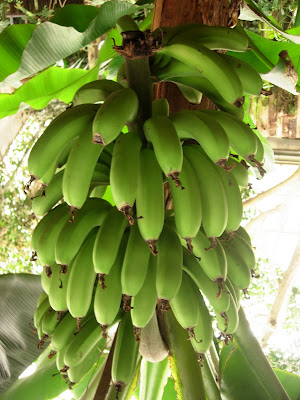 An impressive bunch of bananas on entry to the reptile house. 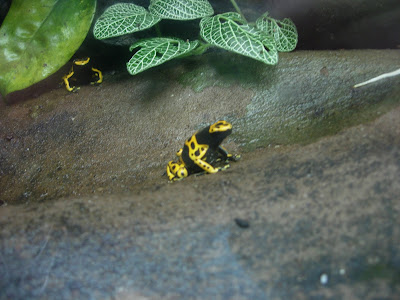 One of several groovy little frogs - the only one where the pic even vaguely came out due to the low light levels and my stubborn refusal to blind the poor things with the flash. 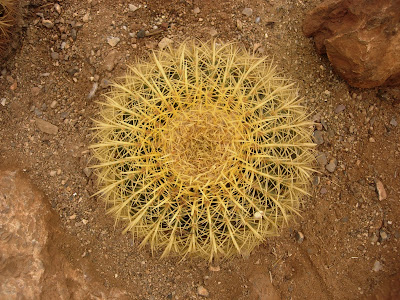 Big cactus. The animals had been moved from the desert house for the winter - all except a group of large fat guineapigs! 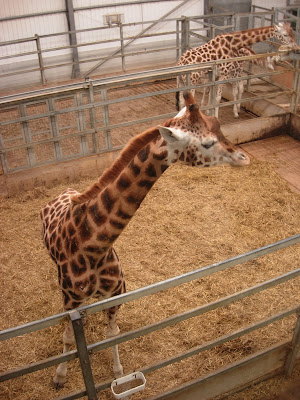 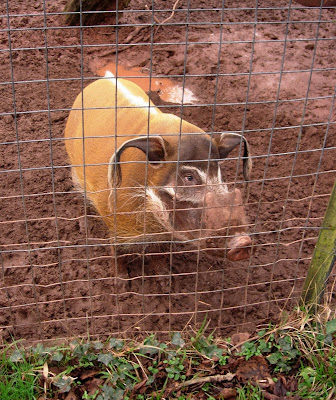 Our winner of fave for the day - the comically bewhiskered Red River Hog. Shorter bodied than the domestic pigs we're used to seeing here it's very much a rectangle with a leg on each corner. We liked him although I've told the Chap the back garden just isn't big enough for one yet...
Posted by Ruthdigs at 12:41