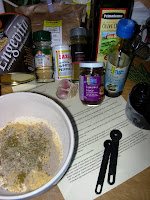 I finally got round to trying out home made fake meat using the wheat gluten Littleblackfox so kindly sent me a little while back. I used this recipe on the net I've had kicking around for some time. It's got a lot of ingredients but that's essential for the flavour - you can experiment and adapt to what works for you or what you may need for a specific recipe / cuisine. The lovely Jeni from the Heathen Vegan site has very kindly given me permission to post the recipe so here it is, in her words:

Mix dry ingredients in a bowl, really well. Mix liquid ingredients in a separate bowl then add to dry ingredients. Whisk well with a fork so as everything is incorporated and forms into a dough. Knead dough for a few mins.
Double wrap in lightly oiled tin foil. If you want to shape the dough into a sausage then do so, rolling the foil round tightly and then twisting the ends.
Bake in a pre heated oven at 200 degrees [Gas 6] for 90 mins - turning over halfway through. Unwrap the seitan and leave to cool completely.

When I got to the kneading stage I halved the mix and left one half as was and added to the other half:
0.5 tsp basil
0.5 tsp smoked paprika
0.25tsp cayenne
0.25tsp fennel - I had seeds rather than ground and am similarly bereft of a pestle and mortar so did my best to crush them in my fingers. 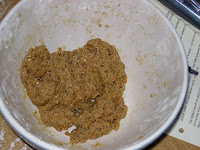 Needless to say the result wasn't exactly even but hey - I'm sure I keep seeing 'rustic' on menus these days so it's virtually de rigueur to have lumps nowadays isn't it? :-D
The idea of this was to get some sort of spicy Italian sausage style end product.
Now I'd never made this before so had no idea how, or indeed if, it would work. I was very hopeful that it would prove to be tasty, have a good texture and be versatile enough to use in a variety of dishes. This would then mean I had a whole new panoply of fake meat options to explore!
Well - I like it. It was very very easy to make, took hardly any time to mix up, a quick and easy knead [I did add a sprinkle or so extra wheat gluten at the kneading stage as I found it quite sticky] then was happily bunged in the oven. They mention turning half way through cooking - I think this is a 'needed turn'; my 2 foil wrapped sausages were turned after an hour and there was a detectable difference in colouring from one side to another so I think if they were left for the whole cooking time unturned the difference would be too much. ['Needed turn' as opposed to things like oven chips / hash browns which tell you to turn them but I routinely ignore. Life's too short y'ken?]
I have to say I will be tweaking the flavourings next time - halving the tamarind as 2 tbsp means you can taste it too clearly in the end product, rather than amalgamated into part of the overall flavour. Also at least halving the white pepper - this much was a bit hot for me at the expense of the other aspects. The Italian type I made was pretty spicy - I guess having us

ed half the mix with the original flavourings already in and then adding cayenne to it might have something to do with that...
All in all a very definite win for the 'fake meat' brigade - even the meat eating Chap gave grudging approval - meaning that he'd eat it rather than it being totally minging like some pretend meat products are, as we all know. [Linda McCartney - I'm thinking of your sausages here.] This was so quick and easy I'm looking forward to experimenting with flavour combos and cooking methods. So far we've tried it fresh roasted as it came out of the foil, and thickly sliced then oven braised with celery and leeks as part of a roast. Both worked. As long as you can get your hands on the *wheat gluten I urge you to try this. I can see it becoming a bit of a pet project with me!
*Wheat Gluten seems to be one of those things widely available in America [where many of the recipes I've seen come from judging by their use of cups as measurements] but not however quite so easy to come by here in the UK. Littleblackfox kindly told me they sell it online at The Flourbin, although it must be said they have a minimum order value of £10 (at time of writing) and you'll need to add £6.95 P&P to that. Otherwise search it out locally or there is a manual extraction method that I don't know and am hoping to get away with not knowing. Good luck. ;-)
Posted by Ruthdigs at 14:00