Fishing fail on the North coast 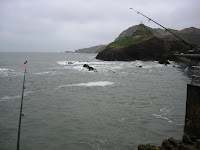 Over the half term Chap's son was with us [I promise I'm catching up!] we went fishing at Ilfracombe in North Devon. You may recall I was a little unsure how I'd take to this but the issue didn't come up. I caught not a thing - absolutely nowt!! We'd arrived early to be there as the tide came in - apparently that's the best time as the fish come in feeding with it. It was an enjoyable few hours standing staring at the sea and coast line in this beautiful part of the world. Chap's son caught a baby ling - whilst I'd nipped off to the lavatories - but they did show me a pic so I'll believe them. As it was a little 'un they returned it back to the sea. Other than that I almost got a crab but he let go as we pulled the end bit of the line [surely there's a technical term for that - hooks &c?] out of the water, waving a cheeky claw at us as he went -whether in thanks for his brekkie or defiance at nearly catching him I'm not sure. [Tackle - it's tackle!!] It was a mostly dry albeit grey morning though and certainly got some healthy sea air roaring into our lungs. 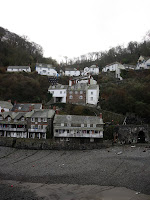 After a fish and chip lunch by the sea [from a place on the Quay road by the harbour - rubbish. Undercooked and soggy and they forgot to give us the curry sauce so we had to go back] we decided to have a drive along the coast. Originally heading for Hartland but we decided to s 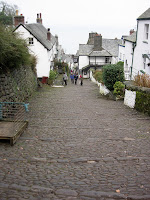 top at Clovelly [or 'clover-ly' as the Chap insists on pronouncing it - lol.] If you haven't come across Clovelly before it's a little fishing village built pretty much down a cliff face on the North Coast of Devon. It's very steep and cobbled and famous for pictures of donkeys that used to carry people and goods up a 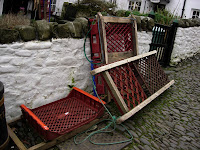 nd down. Now most people seem to have these nifty sledges made from bread delivery trays. There's a hotel right on the front as well as a pub further up the 'hill' [it's a cliff - admit it Clovellyites] 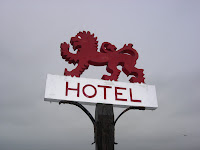 and a fair few wee shops selling touristy stuff and some rather good ice-cream. There's a rocky shore past the harbour and a waterfall down the cliff a little way along the beach. If like me, you walk along beaches staring at the floor and have a penchant for stripy pebbles you'll love it here - just r 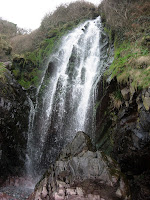 emember that you have to carry any 'finds' back up the hill! Unless of course you opt for the cheaty landrover service to take you back to the car parks - there's no visitor parking in Clovelly at all unless you're booked into the hotel. There seems to be a large number of cats in Clovelly as well, not su

re wyt that should be. There's also a donkey stables and visitor centre if you end up in the main car park. Oh - in looking up that link I've just found out that Clovelly is privately owned and you're supposed to pay to get into it!! We ended up in a little parking area by the recycling bins and didn't pay as there was no one asking us to as we giant-strode down the steep tarmaced road that comes in to the west side of the village. Oops - sshh!! It's a pretty place but I don't think I'd be happy paying nigh on £7 to get in. Anyway, you pays your money [or not] and you takes your choice. :-)
Posted by Ruthdigs at 13:50