Well I'm safely ensconced back home now after finally being allowed out from the hospital last Monday after getting into theatre on the Sunday for my second op in the late afternoon.  Not much to report since then as necessity has dictated I have done very little as standing about is on the banned list which means most cooking / baking activities are curtailed.  I have been falling back in love with bulgar wheat though having got 4 x 500g bags of it in my latest Approved Food order for the princely sum of 99p.  What a bargain!!  And as it only requires soaking in boiling water for 30 mins I don't have to stand there cooking it when I want something to eat in the daytime and the Chap is out at work.  Incidentally if you haven't come across Approved Food in your frugal wanderings then check them out.  They sell discontinued, end of lines, change of packaging and out dated stock which changes constantly.  The postage can sound a little steep as it starts at £5.25 but that covers up to 25kgs of goods so it's the kind of place to shop when they have a whole bunch of items you'd like.  If there are items you can get in the case deals; as I did with the bulgar wheat, then all the better.

I also picked up a load of pasta, various sauces and indian meals, cat food, tofu, 12 pack case of cous cous (also 99p!), crisps etc etc and my favourite; 1.9kg of Bisto veggie gravy granules for £1.49 - that should keep me going for a while as it makes 25 litres!!!  This is just some of the items I got as I've already started using various things and packed away others but it gives you an idea.  My order came to £29.74 in total including the postage - I got a little discount on that as certain items carry a P+P discount.  Full price for these items is £87.52 so that represented a saving of just under £62!.  Not too shoddy at all.  :-)
Anyway, the point of this post was to show you some other bargains I got from our local charity shops on one of the few forays out of the house I've been allowed. 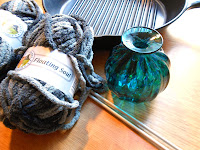 Cast iron griddle pan - I'm especially pleased with this as I've wanted one for a few years now but as I wouldn't use it overly often I can't really justify spending £20 or £30 on one so when I saw this in perfect nick for a mere fiver I snapped it up.  Coincidentally I've also been running an idea for a sandwich with griddled halloumi through my head in the last few days (as a possible entry for this months 'No Croutons Required') so this was a truly serendipitous find.
The gorgeously coloured glass vase is for my mother, it's truly beautiful made of a mixture of blue and green glass fused together and blown into this sort of swirled bauble shape.  This was a whole £3 and is perfect with nary a scratch or mark of any kind, not even on the base.  I thought I might see what pre-loved items I can spy for chrimble pressies for the family this year, in addition to home made goodies.  For the last few years we've had more of a home made / token gifting theme as we're all of the age now that we have houses full of stuff pretty much.  That said this piece obviously does fall into the 'stuff' category but my ma loves glass pieces like this so I immediately thought of her when my eyes alit upon it. 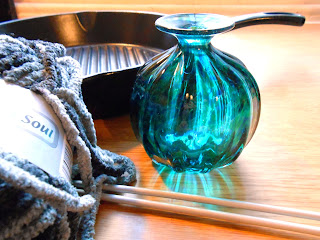 Finally some wool - yarn - whatever it is.  And needles.  Knitting ones.  Though they're the wrong size I've since discovered.  Tsk!  Being of a somewhat ambulatory challenged nature at the moment I felt that perhaps the time had finally come to learn how to knit, even if only in the most basic fashion.  I want to make myself a hat and for the last year or so have been gently getting around to it.  I spied 2 balls of this rather pretty graduated grey soft wool/yarn malarkey and equipped myself with these and what I erroneously thought were the correct size '8' needles indicated on the label.  Apparently not.  That referred to the 8mm size not a UK size 8 which is in fact 4mm.  Obviously.  (There's 3 sizing conventions commonly in use for knitting needles I've discovered so as a newbie what chance did I stand?)  Anyway that charity shop had a whole box full of different needles so I plan to visit again on the morrow on my way home from the latest doctors appointment and have a rummage for a bigger set.
Finally - the more observant amongst you may have noticed a certain alluding to the fact that this will be the 300th post on my blog.  It should be rather more by now for a blog that's over two and a half years old but I have been somewhat slacker at posting this year.  As we enter autumn and the nights are drawing in again I feel hopeful that this may change and I can shake off the edge of general malaise I have felt around my spirits for the last few months now.  As one who has been dragged rather deeper by that before I have no wish to revisit it so am doing my utmost to be resolved to do more, make more, bake more, plant more and last but very definitely not least, keep trying to change job as to quote my beloved Firefly, my current one is 'damaging my calm.'  So - a small pat on the back for post #300, and thanks for joining me here whether you've flitted past by accident or are one of my small band of followers.  And a cheering image taken on Saturday during one of the many downpours we've been having.  Pretty huh? 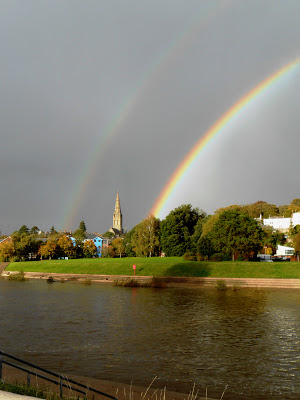