With all this time on my hands recently I've been blog surfing a lot more than I normally do and have stumbled across many new to me fab blogs.  Several of which have been inspiring me in different ways and one of those is the lovely Belleau Kitchen blog and the monthly challenge 'Random Recipes'. Now normally this involves picking a recipe at random from a cookbook; similarly picked at random, and having to make it. (Assuming I've understood that correctly, I have a feeling that there may be themes involved sometimes too.)  This month however is slightly different in that it's a store cupboard ingredient that must be picked, 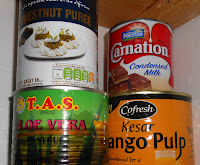 then you make something with that.  Now although I had more random items available than the stuffing mix I used, everything else needed me to visit the shops for additional ingredients which as I'm off my feet as much as poss at the mo didn't seem like the best of ideas ever.  It's not quite an 'essential' trip like the doctors is you know?
So - I decided to use up a couple of the 5 packs of stuffing mix I had in the upstairs store cupboard from a past Approved Foods order.
Right - next step - find a recipe - from your cookbooks. Hmmm - now surprisingly enough none of my cookbooks have any recipes listing 'packet mix stuffing' in the ingredients list, not even quasi healthy 'mixed seed wholemeal' stuffing.  I know - I'm as shocked as you right? So I thought (in an admittedly slightly tortuous justification after the fact sort of way) that I could treat my blog as a recipe book too - as a load of the stuff on here I scribble down very roughly as I make it then transcribe to here which is then it's lasting format.  And enough people seem to search my slow cooker carrot and coriander soup for me to feel the reference aspect could at least be argued for, if not fully justified.  So - I'll go ahead and we'll see if I'm allowed in the challenge.  This is all quite apart from the fact that today is the deadline.  By which I'm not sure if it means submissions should be in by today or up to and including today.  Yes - I'm a pedant when it comes to language and that's just waaaay too open to interpretation for this virgo!  :-D
So - witteringly long intro / justification / obfuscation in the hope the host will give up and just allow my submission through out of pure boredom aside - here's my frugal, quick and simple 'store cupboard stuffing mix bake'.  As 'inspired' (ahem) by this one I previously made, with the added advantage of also using up some of my stocks of cheese, or 'dairy crack' as we now prefer to call it in our household, the need for which was highlighted in my last post.

Vaguely Italian themed Stuffing Mix Bake:
2 packets stuffing mix - or you can make this with one if you don't have a massive overstock of stuffing in your cupboard like me
0.5 tbsp dried basil
0.5 tbsp dried oregano
Boiling water - amount as per packet instructions
2 tbsp tomato puree
Black pepper
Cheese - I used about half to 2/3 of a 300g tub of soft cheese.  You could totally use a harder cheese grated here, whatever you need to use up really.  Some parmesan over the top would work too.
Little butter for greasing dish 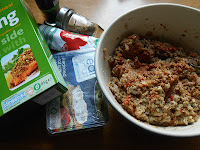 Put oven on to heat as per instructions on the pack of stuffing.  Put kettle on to boil.
Put stuffing, herbs and a few grinds of black pepper (to taste) in a large bowl and give them a quick mix.
Add water as per the stuffing packet instructions.
Add the tomato puree and stir really well. 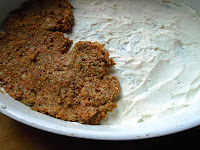 Grease your ovenproof dish; I use a ceramic one, and spread half the mixture evenly over the base of the dish.
Evenly spread your cheese over - a little easier said than done using this soft cheese as it wanted to move the existing layer of stuffing about.  I found leaving it resting on top of the hot stuffing for a few seconds softened it a little and made it easier to spread out; as did placing it on in smaller amounts than the big dolloping spoonfuls I started out with!
Spread the second half of the stuffing over and place in the oven for the time specified on the stuffing packet. 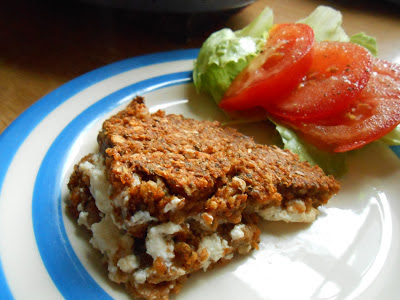 Ta daa!!  Bit messy to serve and please bear in mind I'm not a professional food photographer but served with a little refreshing salad this was a nice wee snack.
Very cheap to make with items you're likely to have in the house already and taking little time this ticks both the £'s and time frugality boxes.  You can jazz it up as pleased - I'd perhaps add more tom puree next time.  Oh - and if you want to photograph it letting it cool and firm up for a few minutes would be a good idea.  Not one I had until after my messy photo efforts mind you...
Posted by Ruthdigs at 16:11