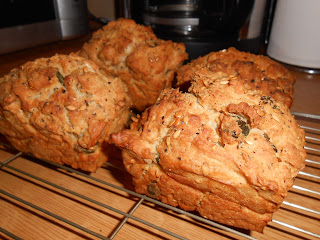 Well I didn't get to post my sandwich for this months No Croutons Required yesterday which was the last day for entries.  :-(
Having made the bread on Friday - a variation on my beer bread with added linseed and black pepper, I had then planned to griddle the halloumi for the filling yesterday morning then submit my post.
First however the dressing on my leg was due for a change.
I'd noticed a little redness on my skin showing out from under the edge of the tape on the friday evening so I was extra cautious peeling the tape off.  Hmmm - not looking too good.  The area of redness had grown to a couple of inches in diameter overnight, it had been oozing a little and worst of all, a small amount of the top edge of the wound where my leg is still knitting together (4 weeks after the inital trauma) looked like it was breaking down again.  Eeeek!!!!  Having been through this before I shouted the Chap out of bed in a panic and we went *straight to the walk in centre.
(*After he had showered and breakfasted and generally faffed about for ages - or that's what it felt like to the slightly panicking me!)

Luckily enough the wonderful Kathleen the tissue viability specialist who had seen me before was in residence and after a surprisingly short wait, compared to the hour and 15 minutes we were quoted, she was ushering me into her room. After an inspection of the wound she agreed with my intial assessment that the infection was returning but due to the extensive nature of the problems I'd had with it decided to phone the plastics team at the hospital that had done my operations and consult with them.  They requested that I be sent to see them so we duly drove across town and booked in at the reception.  After an hour there I got taken through to a cubicle and issued with wristbands.  'It doesn't mean you're staying in' they attempted to reassure me as they fitted them.  They like to get them on me as I am allergic to a certain drug so the red band warns everyone to ask what it is that I can't be given.
Another 30 minutes ticked by then a specialist appeared and explained they would do blood tests on me to see if my white cell count was up, which it should be if it was fighting infection, and if some other marker was also affected - I forget what it was called now.  He took the blood, uncharacteristically* gave me an idea of what was happening next by telling me it takes about 45 minutes for the results and vanished off again.  (*I am in no way belittling our wonderful hard working health professionals at all but what I found far and away the most frustrating thing during my recent stay in hospital was the lack of information when you were waiting for things, especially when I was getting admitted.  If you have some sort of end time / goal in sight it makes sitting there doing nowt for 2 hours rather more bearable.)
After nearly an hour I enquired gently as to my results and the lovely staff said they'd chase them for me.  Duly the same guy reappeared and told me that according to their blood test my leg isn't infected and he thinks the redness and accompanying 'icky' bits were just due to general healing processes and I was free to leave.  Which should have reassured me but I'm afraid to say, it hasn't. 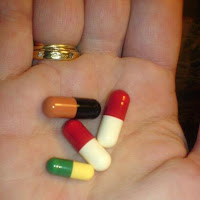 I'm one of those people that as a general rule has the utmost faith in our health professionals and what they tell me.  Only this time...I think they're wrong.  Now I have no idea how long it takes your white blood cell count to go up in case of infection but as this only started coming on the previous evening I'm wondering if it would show up on a blood test the very next day.  Both Kathleen and the triage nurse who admitted me had taken one look and been convinced it was infected and after I got home from the hospital there was a definite few degrees temperature difference to that area of my leg compared to the rest of it.  Which is still the case today.  Anyway, I shall keep a very close eye on it today.  I am also taking the antibiotics I had left from the first time I
went into the hospital and they put me on IV ones instead.  It can't do me any harm and perhaps will keep this at bay until I can tell whether I need to go and see anyone further about it, or if it really is just the healing process.  Fingers crossed! 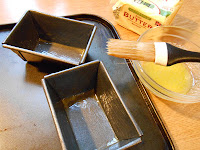 All this kerfuffle meant that I didn't get to make my proposed 'Griddled Halloumi on Black Pepper Seeded Bread – with lime and fresh coriander leaves' sandwich for the aforementioned NCR comp.  Tsk!  I did get the bread made though and used my dinky little mini loaf tins for the first time - aren't they great?!  I'm a sucker for miniaturised versions of stuff for some reason and purchased these in TKMax some time ago so was glad to have finally justified them.  So we had bread but not the final sandwich; and I had a Saturday but not the one planned.  Unfinished weekend - oh were did you go?
Posted by Ruthdigs at 16:31