View from a bed

To be precise; a hospital bed. Yep - that's right - my leg got progressively nastier with first the cut itself becoming infected followed by a haematoma developing that got itself to the size of a grapefruit then also became infected.  Eek!

The long and short of it is that I went for a dressing change on Wednesday, the 'tissue viability specialist' was none too happy with the state of my leg and called the hospital. They agreed I should be sent in and I was told they'd need to operate to get rid of the haematoma; which at this point we didn't realise was also infected.  I'd get done either weds evening or thurs morning, either way I'd be home thursday; having spent my first night since I was born in hospital and had my first ever operation.  My state of calm (or lack thereof) wasn't helped by the knowledge that the Chap was working away so would not be on hand for morale boosting hugs but at least it was just one night and I'd be home by the next day. 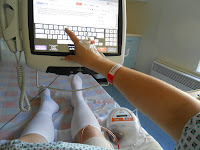 So we must ask ourselves why I'm writing this on an annoying touch screen pay as you go contraption hanging from the wall above my bed in the RD&E hospital on a sunny sunday morning?  Welllllllll...
It took some time to get me admitted, even with them expecting me.  I got assigned my bed at 10pm weds having arrived at 4.30pm.  So no op weds. This was when they first concluded that the grapefruit sized lump in my leg was infected too and swiftly got a cannula - the thing in your hand for drips to attach to; fitted to my left hand and shunted some antibiotics straight into my system. 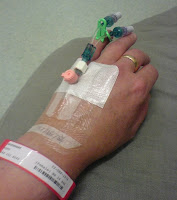 Thursday morning brought the news that although I was scheduled to be the final procedure of 4 booked in for that afternoon, there was a chance I'd be done in the morning as there was only 1 person booked in then, and of the afternoon's batch; I was the only person already physically on site.  Oh false hope thy crusher of the spirit - it was not to be. After being 'nil by mouth' (which includes water to my surprise - remember I never had an op before) since 7 thursday morning; so in effect since the 2 bits of toast I scrounged on getting to my bed at 10pm the night before, I was taken to theatre at 5.40pm and knocked out at 6.10.  Op went fine but on awakening I found I had a vacuum pump drain thing attached to my leg. It transpires that when the sugeon went in they found the damage was deeper and more extensive than anticipated so had to fit the drain. 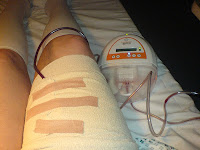 This had 2 knock on effects for me; firstly came the news that I'd have to have a second operation in 3 days time to remove it and close the wound. Secondly, although I was hopeful both friday and saturday mornings of being let home, the extent of the damage and the drain in my leg put the kibosh on that.
So, here I still am and I've just received the news that they have me on the list for theatre today at 12 noon.  Barring any emergency cases coming in hopefully this means I may be able to go home tomorrow.  I am crossing my fingers because no matter how lovely all the staff are that have been looking after me, it's not the same as being in your own home. I miss the Chap and Zeke and I'm looking forward to big hugs with them both.
(I'd also quite like a meal with a texture other than easily-masticated-with-no-teeth sludge but that's another post.)
So, all being well, I'll next post after op #2.
Oh - latest news is it could be earlier; 10/10.30 possibly.  Fingers firmly crossed now blog buddies!
Posted by Ruthdigs at 09:28