Don't fret - I haven't fallen off any wagon and am still a non-eater of meat [although I am an eater of fish making me a pescatarian not a true veggie.]  The Chap is however an eater of meat and it struck me that apart from bacon or a steak I really know naff all about cooking actual meat dishes.  Granted I could probably muddle my way through a roast with the help of instructions on the back of the label but it's not something I know - which irks me somewhat considering how much I like cooking.  I went nearly all veg at 16/17ish so before I really started cooking for myself, only returning to eating fish at uni.  [Prawns were the only thing I never gave up - one Marks & Spencer Prawn and Mayo sarnie a month kept me on the straight and narrow the rest of the time.]  Not having eaten the stuff for so long whilst I learnt most of my basic cooking skills means there's a distinct lack of meat dishes in my repertoire.
This is all kicked off due to the Chaps rather good haul of CFC bargains from the Co-op the day before they were shut for easter.  He got a plethora of sausages, ox liver, lambs liver, diced beef as well as a gammon joint and a couple of big rump steaks.  Nearly all of it ended up in my freezer and when it started to become impossible to fit my frozen sweetcorn in I decided it was time I did something about it and cooked some of the damn stuff for him.  First up then was a basic sausage [sos / snag / banger - you're choice of colloquialism] casserole.  Long ago I'd kept a recipe from a jar of sauce of some kind and this then was my basis for this slow cooker dish adapted to fit the ingredients to hand. 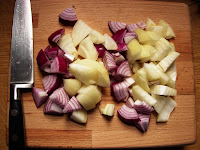 Cook the sausages a bit - to help them keep their shape in the SC.
Heat the EVOO and add the onion and garlic.  Fry gently to soften.
Add the mushrooms and cover then cook gently a few minutes more.  Tip the lot into the SC and whack it on High to heat up.
Add the toms and juice from the tin, a splosh of white wine and the stock; made with boiling water as this will help the ingredients get up to heat faster.
Add the lentils and the thyme and paprika and stir all together.  Judge the amount of liquid in there; the lentils will swell so if necessary add a little more wine and/or stock to ensure there's enough to cook them in.
Chop the sos into inch-ish long chunks and add to the SC.
Cover and turn to medium or low depending how long you've got.  Mine ended up having rather longer than needed with 6 hours but it won't harm it.  Just make sure the lentils are properly cooked through.
Stir your greens in and re-cover to let wilt for a few mins before serving. 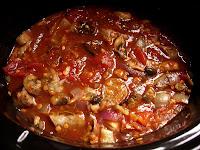 See - it's easy!! Admittedly using a pre-formed thing like a sausage seems a wee bit cheaty but it was what we had to hand after the CFC sweep bargain night - these cost us 40p a pack of 8 making this a deffo tick in the 'frugal' box.  They seemed quite 'solid' sausages - not too spongy - actually containing some meat!  Which I think will have helped them keep their form in the SC.  Otherwise the chap enjoyed it and I can [just about] claim that I can make sos casserole.  Kind of...  ;-)
Posted by Ruthdigs at 18:01