Underachiever of the weekend....

Well, not so much achieved over t'weekend  - although chillaxin occurred!  The Chap ended up working unfortunately so the trip for cheaty plantlets was put off as was the shelf erecting.  I'm fully capable of putting shelves up myself but my drill has ended up on some sort of long term loan / theft by increments to a friend so I'd have to borrow the Chaps'.  Which means he would be most effronted that he wasn't doing the actual work himself and would insist on doing it; except he wan't there to do it and neither was his drill.  You see what I mean?
Allotmenting occurred and I'll be heading there again after work to harvest some more perpetual spinach beet stuff and strawbs.  The beet stuff is great - some went to seed last year so it's been an early bonus crop - although supply is starting to outstrip our use of it!  I'll have to clear some space in the freezer and start making spanoptika or whatever it's called.  Always fancied trying it - never got round to it somehow.  Perhaps I should make it my entry to the 'Bookmarked Recipes' challenge Jacqueline over on Tinned Tomatoes is holding - I've got files full of recipes I've printed or copied off meaning to make and never got round to it... somehow it doesn't surprise me! 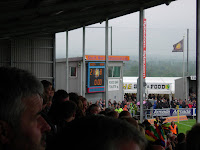 Anyway - lots more to be done this weekend although I shall be spending some of it attending the very good Exeter Respect Festival - a free weekend event with diverse types of music, arts, crafts, food etc. to celebrate the diversity of our fair city.  Good shout sez I!
Oh - and another good (if belated) shout - the Chiefs winning their final game of the season 21-8 against London Wasps to finish the season 8th in the table. Sweeeeet!  :-D
Posted by Ruthdigs at 14:17