Except it was leftover roast gammon not bacon.  Chap had done the roasting the previous Sunday and had smothered the half joint [another pre-easter CFC bargain at £2 instead of a tenner - I couldn't believe it when I saw that that's how much what is effectively a big lump of ham costs normally!  What a rip off.] in English mustard and I think; a wee bit of honey.  I'll have to check that detail with him. - Yep - honey
The Ox liver was also a CFC clogging-up-my-freezer-space meaty bargain at something like 40p so I took the opportunity to combine some leftovers with the frugal liver to create a hopefully tasty dish for t'Chap [who had ended up getting sent off to Plymouth for work meaning he would be back rather later than usual] and reclaim some of the freezer space for veg stuff.

This was loosely based on a recipe I found here, after googling Ox liver.  Top pointers seem to be that it's the toughest of the livers available therefore needing a long slow cooking method, but is also the 'tastiest' - should you like the taste of liver.  Bleargh.  Even back in my meat eating days I detested liver so this was going to be an interesting cooking experience!

Slice the liver and toss in the seasoned flour.  Ha - damn sight easier said than done.  Liver is damn messy - muchos blood, not pleasant at all.  In fact it's pretty damn manky I'm afraid.  If you're a veggie that's squeamish don't do liver is my advice!  Anyway - having sliced the [literally] bloody stuff next comes the flouring - I feel I may have done this bit slightly wrong.  I dumped the flour on top of the liver and stirred.  This gave me a passable imitation of lumpy concrete in a fetching [NOT] pink shade.  Hmmm - promising thus far then! 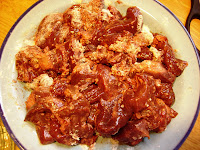 Place your gooey icky pink mix in the bottom of the casserole - oh sorry - that should read 'lay the liver in the base of the casseole'  lol. 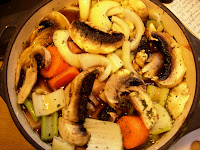 Mix the veg and gammon together and put over the top.
Sprinkle the herbs over [the recipe said sage and of course the day before making this was when I moved the pot of sage from outside the front door to down the allotment so I used what I had] followed by S+P.
Pour stock over until just on/over the top of the veg.
Top with thin slices of potato arranged in a pretty pattern- or chucked on any old how - it doesn't really matter and depends how much time you wish to dedicate to aesthetics. 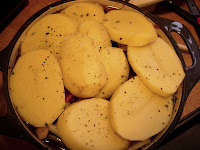 Put lid on and whack it in the oven for 3.5 hours then uncover for another half hour to crisp the top.

That's it.  Apart from the whole unexpectedly large amount of blood and the flouring bit it actually wasn't too bad - chopping veg is kinda second nature and it's a dish you just bang in the oven and walk away from rather than one you have to hover over constantly.

Chap enjoyed it but did mention he'd have liked some tomato flavours in there.  It had crossed my mind to add a good tbsp or 2 squirt of tom puree to the stock - esp. as I was using veg stock cubes not having beef ones in the house and evidently they aren't going to have the same flavours or depth of flavour for a meat based dish.  This being the first time I made this though - or any liver dish in fact I was wary of tweaking it so didn't.  Hey ho - I know for next time.

My verdict - it didn't seem that exciting a dish when made to me - perhaps mixing the meat and veg more as well as the addition of the aforementioned tom flavour would work better.  Also - I need to work on my 'flouring the meat' technique I think!  :-D  Not bad for a first timers offal effort though.
Posted by Ruthdigs at 18:20