Caesar on the island 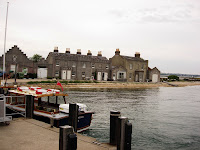 This years BOAT (Brownsea Open Air Theatre) offering was Julius Caesar, not a Shakespeare play I'd seen before.  For once we'd managed to assemble both sides aunt and uncle as well as both the big sis's and my bro in law.  We took the customary picnic (see last years trip here) over on the boat to the island, enjoying the views of Poole harbour and the crenellated cottages on the island on the way.
Upon alighting we were 'welcomed to Rome' and met again at the entry to the grassed area the stage is set up in.  This is a nice touch they haven't utilised before; although met with traditional English reserve, downcast eyes and shuffling feet from many of the boat passengers who were obviously somewhat startled to find they were having audience participation thrust upon them at this early stage of the proceedings! 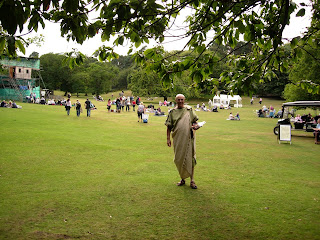 We trailed off to our favoured spot and for once this year there were no skirmishing raids mounted by peacock attack teams on the goodies spread out.  My job this year was cheese [can't think why ;-)] and I assembled a nice selection of Quickes applewood smoked cheddar - don't let the 'smoked' appellation put you off.  This is about as far away from that plasticy smoked cheese from Europe as you can get.  It's done using their mature cheddar which is a lovely full flavoured cheese in it's own right and the smoking just adds that touch of difference.  I wouldn't consume masses in one go but as a change it's very good.  Little big sis really liked it though and ended up going off with what was left of the block!  Also along were 2 diffferent blues, one cornish [Tinners?] and one Devon - I think.  Have to admit I need to check which they were!  Then a block of the regular Quickes Cheddar too and some lovely brie.  [Incidentally has anyone ever come up with a fulfilling re-use for the wee wooden boxes camembert and brie come in?  Seems such a waste to just pitch them out...]  We had a fabulous picnic then went to watch the show.  I'm afraid the taking of photos is rather frowned upon in the auditorium so I don't have any for you.  Suffice to say it was very good with plenty of blood and fight scenes which were very well choreographed.  The costumes and special effects really made it too.  Afterwards tired and happy we bundled back onto the boat to cross back over the harbour, agreed to meet up next day and took our seperate ways home to bed.  Except once back in the village we opened another bottle of wine...  :-)
Posted by Ruthdigs at 14:01