It’s been a good start to the season for the Chiefs.  First proper game (after trouncing Connact 47-10 then local boys Cornish Pirates 58-3 followed by the somewhat closer 16-13 result against the Scarlets in the pre-season friendlies) was away to Leicester Tigers.  Tigers [Hwak ptooie] have been omnipresent at or near the top of the table for some time now and much as I’m not a fan, they are a force to be reckoned with.  However – whether it be due to having several (ok - 11) players out for the world cup, bad defending from them or damn good play from us [guess which I'm favouring] our opening game of the season saw us scrape a 30-28 win over the Tigers on their home turf.  Woop!  Only the second time they're been beaten at home in the last 3 years.  Not bad for a club starting their second season of the premiership that this time last year had been written off by all the bookies and the 'big boys'.  I wasn't there to see it being busy entertaining BBQ style at the time but was mighty happy when the Chap looked the result up for me. 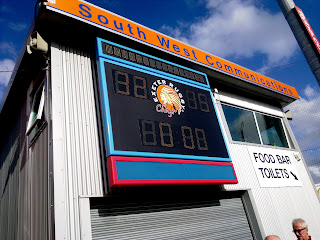 After securing my season ticket for this year; with the grace of Great Aunt Joan, I was looking forward to the first home game against Newcastle last Saturday.  England had recorded a lacklustre win that morning against Argentina in their opening game of the world cup so we were up for something a little more exciting.  First try for us went over in the first minute - that exciting enough?!  We won against a valiant Newcastle side 32-15 to give us our first ever 5 point win and make us top of the premiership table for the first time ever in the clubs history.  So - all to play for against Bath tomorrow and yes - it's on the telly at 5.30pm Sky Sports 3 should you wish to join  me in cheering on the Chiefs.
Posted by Ruthdigs at 18:08