The 3 R's, or - Take a bit of damn responsibility

Not the 'painfully coerced into fitting a twee phrase' 3 R's of Education (Dur - 2 of them don't even start with R - and you're using them as related to Education - frak me you really tried for the irony there huh?) but the rather greener Reduce, Reuse and Recycle.
It was only when I read recently that you should also try and do them in this order that this became blindingly obvious to me as well. It is obvious - I just hadn't ever formed words round that nebulous 'but everyone knows that' concept that we all like to spout sometimes and probably have 'The Man In The Pub' to thank for. (Let's be honest here - quite often the cry of *'B.E.K.T.' is more out of affronted embarassment and annoyance at oneself for not ever having put such a blindingly simple concept into a succinct pet phrase that all can easily grasp and moreover, that you can trademark and make a bundle from every time a newspaper uses it, than actually because you had ever devoted any time to thinking deeply about it before. :-) But I digress...)
Reduce - does what it says on the tin. Easy example - take your own shopping bag with you = therefore using less plassy bags = less resources used to make said plassy bags plus less of them being disposed of after they have fulfilled their purpose. (Love these people's concept of guerilla bagging.)
At this point I will say that I have zero intention of explaining why these should be good things for us to do. If you have made it thus far in life and have no idea what I'm talking about you are either a) approx 3 years old in which case I'm sure Dora the nauseating poppet or someone similar can explain it to you or b) you have been living under a rock for the last few decades in which case much the same answer as a) applies I would imagine.
Reuse - what we are stuck with and can not get rid of under the Reduce principle we should at least try and reuse as much as possible, so the best possible 'value' is got from the energy and raw materials that went into making it.
Recycle - can be pretty energy intensive hence why it should be the last option of the 3 green R's.
It's Reuse I wished to comment (/rant - you know me) on today and some spiffy ideas a bunch of us over on the Cottage Smallholder site came up with for garden related stuff. If you're not too bothered about the looks of your items all the time, particularly for those 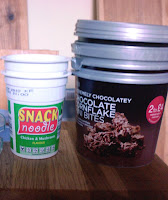 temporary solutions, there is a wealth of stuff out there that can be utilised in the growing process. Plastic food containers of all kinds can be pressed into service as seedling trays or pots (plastic/polystyrene cups), then 'growing on' pots of differing sizes. This is a great re-use as otherwise these containers would be going straight into the recycling (hopefully) bin but are durable things with much life left yet.
I got to thinking - what about a reuse for those odd things that no-one uses but you all seem to be stuck with? Specifically the plastic egg trays that come in new fridge doors have always vexed me with their pathetically hopeful pastel tinted plastic non-usefulness. Chirpily they sit there taunting you with a non-existent 50's 'futuristic' world 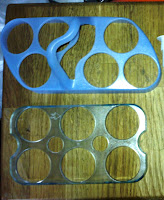 where all would be rounded, pastel, and yes - plastic. [Is this only me or is anyone else thinking - 'YES - I too know that vexedness?'] Then it hit me - we all save our old egg boxes to chit potatoes in right? (Ok - that's for a given value of 'all'.) Why not round up your friends and relieve them of their plastic egg trays (unless they're actually using them - I've yet to see any doing the task for which they were spawned) then you have easy clean durable trays for the spuds - chitting thereof, and can pass any cardboard egg boxes onto your chicken owning friends - hopefully in return for an egg or 2. Ta Daa!! (I'm quite pathetically pleased with this flash of inspiration.) I think it may even count as Upcycling; like recycling, but reusing/retasking items to give a finished product of greater use/value than the original constituent parts. I have grand plans for a shed along these lines but they have yet to come to fruition...
For more (and far better as lots are from other people) ideas along the same lines you can download our tips as a pdf or a word doc from the original post here, courtesy of the lovely **CSH people. (Designed to be printed out double sided.)
Anyway - apologies for the many asides in this post but hoping it may sprinkle a little inspiration and please share your top pet ideas.
*B.E.K.T.: But Everyone Knows That
**CSH: Cottage Smallholder
Posted by Ruthdigs at 18:54