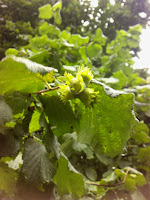 Walking into work this morning and noticing the hazlenuts and conkers forming on the trees suddenly brought it home to me how much of the year is already gone. What have I achieved thus far? If I'm honest - naff all. Not of the big stuff anyway. I feel like I've been moving in a torpor through the year so far and am only just beginning to realise it's time to come out of hibernation again and get something done. Given that half the year's already passed that's a depressing thought. I really must get better at giving myself a kick up the ass from time to time. Chin up eh?!
Hmm - one feels that at a juncture like this one really ought to come up with some sort of "list of positivity charged stuff which I'll conquer before the year's out" or some other wondrously upbeat thing; however, the problem with those is that if you don't manage to tick every one of them off (damn - never did trek up Killimanjaro this summer) what you are left with is merely a device for staring your own failure in the face. And I don't think any of us need any more of those than life already feels the need to supply. So - no list for me. [Yes - that was a longwinded way of saying it but I have always been of the ilk of 'why use one word when 12 will do' and yes for a second time, I used 'and' to start a sentence with and I'm fully aware that you shouldn't but hey - sometimes it just fits. We're not pretending this is highbrow prose or anything after all.]
On my non-list nebulous *thought-board: - STOP STOP STOP - I started putting stuff down, then I thought 'ooh, it'll be all neat if I bullet point it' and what did I get? A sodding list!!!
Suffice it to say I would like to get various bits of my life in order and should that be attained, then see if I can do anything fun with the remainder of the year. That juzshy and upbeat enough for y'all? *wry smile*
*Thought-board: I just invented it but I like it. A non-corporeal cork-board kinda thing for collating thoughts all on the same topic.
Posted by Ruthdigs at 18:17